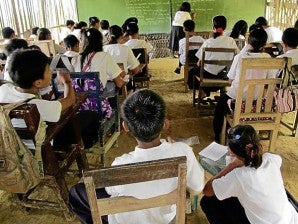 MANILA, Philippines—A top official of the Department of Education on Saturday expressed reservations over the proposed shift in the opening of classes from June to September, saying, among others, that the implementation of the K to 12 program has in a way already made the country at par with the calendars of the Association of Southeast Asian nations and those of other non-Asean countries.

“One of the things being talked about on the school calendar is correspondence. We have already caught up (with those other countries through) K to 12,” Education Assistant Secretary Tonisito Umali said in a radio interview.

He said that before K to 12, observers would note the “lack of years” a student in the country would need to invest in studying to finish high school.

Under K to 12, he said: “(Finishing) high school for example here is equivalent to finishing high school in (those other countries).”

“Is that the same issue that we will face once we have Asean integration—the movement of basic education students to other countries? So far, we don’t see that,” he said.

He noted that in the first place, school calendars in the Asean region are already varied, with only “two to three” countries starting their basic education classes in August or September.

In Malaysia, for example, he said basic education classes start in January or February, Thailand in May, and Indonesia in July.

“So they’re not almost all the same,” he said.

Palace open to moving start of school year to Sept.

UP board mulls moving class opening to August