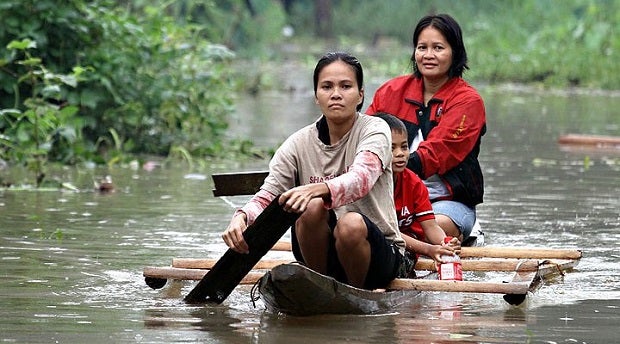 Residents ride a boat as they paddle along a flooded village brought about by heavy rains in the outskirts of Butuan City, Agusan del sur province, in southern island of Mindanao on January 13, 2014. Twenty-two people have been killed and nearly 200,000 others evacuated from floods and landslides that hit a southern Philippine region still recovering from a deadly 2012 typhoon, the government said January 14. AFP PHOTO/Erwin Mascarinas

“Agaton,” the first cyclone to hit the country this year, has affected nearly half a million people in 14 provinces in the Zamboanga Peninsula, Northern Mindanao, Davao and Caraga, the National Disaster Risk Reduction and Management Council (NDRRMC) said.

Among the latest casualties were three people—including a 9-year old boy—who died in a mudslide in Santiago, Agusan del Norte, on Friday.

The victims were identified as Loloy Decoy Salabe, 9; his grandfather Saturnino Decoy Sr., 49; and uncle Saturnino Decoy Jr., 35, all residents of Sitio Kaungan in Jagupit village.

Sixty-five others were wounded while seven people remained missing in western, northern and southern Mindanao, and Caraga, the NDRRMC said.

It said 65 people were reported injured in the affected areas.

Most of the fatalities died in landslides or drowned due to flashfloods.

Of the fatalities, 16 were from Compostela Valley, Davao Oriental, and Davao del Norte which also bore the brunt of Typhoon “Pablo” in December 2012.  “Pablo” killed over 1,000 people.

In Caraga, 18 people were reported killed, the NDRRMC said yesterday.

Since Friday, the NDRRMC said it has recorded 13 landslide and flooding incidents that displaced a total of 466,911 persons across 564 villages in the four Mindanao regions and in the Visayas.

Iligan City, Lanao del Norte, the towns of Kapalong, Carmen, Asuncion, New Corella and Tagum in Davao del Norte and the towns of Tarragona, Manay, Caraga, Baganga, Cateel and Boston in Davao Oriental are now under a state of calamity.

Also under the state of calamity are the towns of Sta. Josefa, Sibagat and Bunawan in Agusan del Sur and Butuan City in Agusan del Norte.

All sea and air travel to and from Caraga region had been suspended.

The NDRRMC said that initial estimates showed that “Agaton” caused some P256 million worth of damage to agriculture and infrastructure.

“Agaton” also stranded a total of 9,574 passengers in Bicol and Central and Eastern Visayas, the Philippine Coast Guard reported on Saturday.

In a report,  Cmdr. Ivan Roldan of the Philippine Coast Guard said 1,809 passengers were stranded at the port in Catbalogan, Samar, and 7,104  in Matnog, Sorsogon.

Roldan said Coast Guard units have been placed on heightened alert to be able to respond to any emergency.

The weather bureau has maintained its storm alerts in several provinces in Mindanao with “Agaton” virtually unmoving over the country’s eastern coasts.

As of 4 p.m. Saturday, the eye of the depression was observed some 185 kilometers east of Hinatuan, Surigao del Sur, or at 305 kilometers southeast of Surigao City, the Philippine Atmospheric, Geophysical and Astronomical Services Administration (Pagasa) said.

Packing peak winds of 55 kilometers per hour near the center,  “Agaton” is forecast to “remain almost stationary.”

Pagasa said Agaton was projected to be 40 km southeast of Surigao del Sur by Sunday morning and within the vicinity of Cagayan de Oro City by Monday morning. It is expected to be at 65 km southwest of Cotabato City by Tuesday morning, Pagasa added.

Across several Mindanao provinces, sunny skies had been reported but Pablo-hit areas are not taking chances.

“It was like this when Pablo struck,” Fr. Clark Darwey, parish priest of Baganga, Davao Oriental, said by text message.

Darwey said the Pablo experience has taught people good lesson and that is to leave their homes for safer areas in the first signs of danger.

“There was evacuation, particularly of those near the coast, last night (Friday),” he said.

From Yolanda to Agaton: Floods continue for E.Samar residents