Palace open to moving start of school year to Sept. 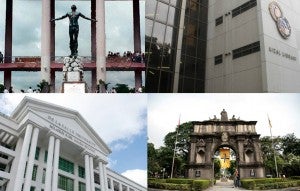 The University of the Philippines, Ateneo de Manila University, University of Santo Tomas and De La Salle University (clockwise) have proposed to adjust their academic calendar to that of the rest of the world, prompting the Commission on Higher Education to weigh the proposal of the “big four” universities for a change in the start of the academic year to August or September. UP PHOTO FROM INQUIRER FILE; ATENEO, UST AND DE LA SALLE PHOTOS FROM THEIR FACEBOOK ACCOUNTS

MANILA, Philippines – A Palace official on Sunday said they are open to moving the start of school year to September instead of June.

Communications Secretary Herminio “Sonny” Coloma, Jr. said over state-run dzRB that the proposal was in line with the Asean (Association of Southeast Asian Nations) Integration in 2015.

(The government is open to studying proposals to move the start of classes in college from June to September, as part of our preparations for the Asean integration set in 2015.)

Coloma explained that the Asean Integration program is aimed at paving the way for Asean mobility, which will allow citizens of member states to freely travel and pursue international studies or other professions.

Nevertheless, he said they are relying on Congress to head the study and come up with a law on changing the school calendar.

The Philippines is the only country in the Asean that follows a June-to-March academic calendar.

‘I’ll see you in September’

In the Know: PH only country with June-March school year