Black prop or dark humor? Binay takes it all in stride | Inquirer News

Black prop or dark humor? Binay takes it all in stride 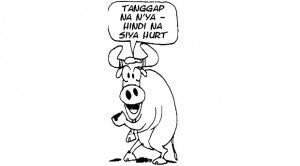 “Dark” humor or black propaganda? For this official often on the receiving end of cruel or offensive jokes, there are no hard feelings.

Vice President Jejomar Binay looks at jokes and criticisms in a positive light, saying posts that poke fun at him on social media—a recurring “trend” for him and his political family—show the kind of freedom the nation has been enjoying since its liberation from martial law in 1986.

Binay, who is one of the key figures who fought the dictatorship of the late Ferdinand Marcos, told student leaders on Friday that the freedom to air their opinion without fear of consequences “should be seen as a reminder of the successful struggle against martial law.”

It was a seeming change of tone for the man at times called—in light banter—as the “dark horse” in Philippine politics. At one time, Binay suspected that there may well be an organized effort to taint—if not blacken—his name on social media.

“Every opportunity to joke and laugh at our officials, for me, is an unfailing reminder of our triumphs in battling the oppressive regime, one that repressed even the right to laugh—even at the most humorous moments,” Binay said in a statement Saturday.

Binay made the remarks in a speech Friday night as he played host to student leaders in a dinner marking the 2nd Annual Salubungan Workshop, a gathering organized by the Edsa People Power Commission.

The Vice President, many times the subject of criticism on Twitter and Facebook, said he was not offended by social media posts about him, especially those pertaining to his dark complexion. Binay himself would at times make fun of his complexion, having grown accustomed to the punch line.

Just days after the first-term election of United States President Barack Obama in November 2008, Binay declared his intention to seek the presidency.  At the time, jokes were rife that he, like Obama and his historic victory, could pull off a first—that is, become the first “black” Philippine president.

“They don’t understand that for someone like me who lived through the dark days of martial law, our freedom to laugh now is a reminder of a victory—that is, the victory of those of us who fought to achieve the kind of freedom you enjoy today,” Binay told his young crowd in Filipino.

“This is the freedom to express your opinion and beliefs through any possible medium, from Facebook and Twitter, through print, radio and television,” Binay said.

Binay, a human rights lawyer during the martial law years, recalled being fined for laughing during a hearing on a sedition case against an anti-Marcos newspaper at the time.

“I was cited by the judge for contempt because according to him I was laughing the loudest during one act of collective defiance from the courtroom audience,” he said.

Binay’s remarks came amid a social media experience that has found him on the “trending” list a few times.

In September last year, Binay was the subject of Twitter chatter that criticized his involvement in failed negotiations for a truce between government forces and rebels from the Moro National Liberation Front faction led by Nur Misuari.

The incident prompted netizens to call Binay epal, the street slang for mapapel, a Filipino term for attention grabbers. It did not take Binay long to decry the criticism and expressed hurt about reports on his involvement.

The Vice President has also been a target of antiepal crusaders on social media, netizens who call out Binay for his posters in social welfare events and labels in his name on relief packs.
RELATED STORIES: