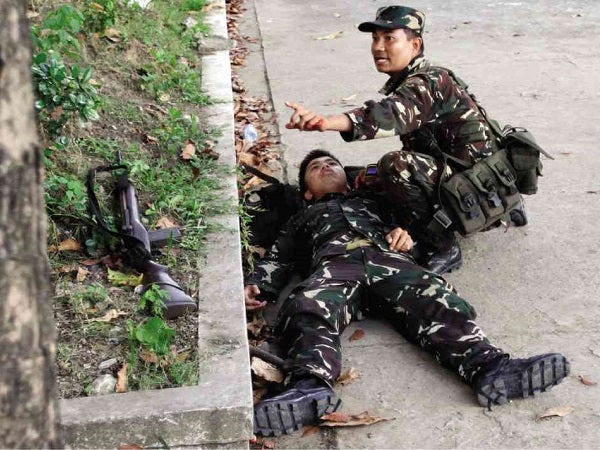 WOUNDED SOLDIER A government trooper tends to a comrade who was wounded by mortar fire on the fifth day of the standoff between government forces and Moro rebels in Zamboanga City on Friday. EDWIN BACASMAS

In an interview, Binay said he spoke with both Misuari and Gazmin around 10 p.m. Friday about the implementation of a ceasefire while pursuing a deal to end the security crisis in Zamboanga City.

“Both sides agreed to stop the fighting while pursuing a peaceful settlement. They agreed to implement a ceasefire as soon as possible tonight,” said Binay when reached by phone at midnight.

He had just spoken to Misuari and Gazmin an hour and a half before the Inquirer interview. He did not say which side reached out first.

Binay will fly to Zamboanga City Saturday to iron out the mechanics of the “peaceful settlement” deal, details on which he did not disclose yet because of the sensitive nature of the talks.

He said he will be meeting with Gazmin and will likely talk to Misuari “over the phone.”

Binay and Misuari were classmates at the University of the Philippines-Diliman.