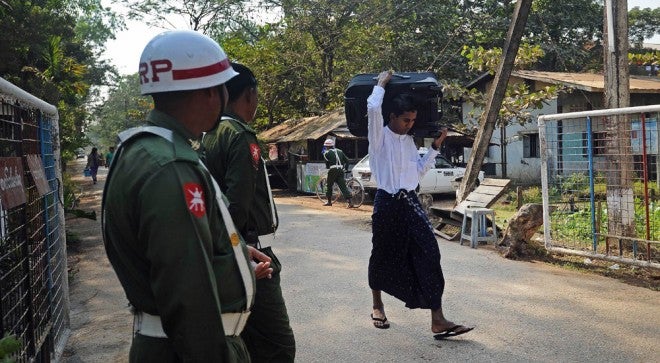 A former Myanmar child soldier (R) carries his belongings as he walks out from a military compound in Yangon after a ceremony discharging a group of children and young people back to their parents and guardians on January 18, 2014. Myanmar’s army has freed 96 children and young people from its armed forces, the United Nations said on January 18, hailing a “historic step” towards ending the use of child soldiers in the formerly junta-run nation. AFP

YANGON – Myanmar’s army has freed 96 children and young people from its armed forces, the United Nations said Saturday, hailing a “historic step” towards ending the use of child soldiers in the formerly junta-run nation.

The move was the largest single release of child recruits since Myanmar’s new reformist government and its “tatmadaw” army signed a June 2012 pact with the UN on the issue.

A total of 272 children and young people have been released over the past 18 months as the military has slowed — but not yet completely halted — its use of children.

The release was “a historic step towards ending the recruitment and use of children by the Myanmar Armed Forces,” the United Nations said in a statement.

Bertrand Bainvel, representative for the UN children’s agency UNICEF in the country, said the move was “a strong commitment by the Myanmar Government and the Tatmadaw to end a practice that steals the lives, hopes, and dreams of children”.

There are no verifiable figures on how many children are currently serving in Myanmar’s huge military, which has faced a slew of accusations over rights abuses, including the forced recruitment of children and other civilians to work as porters or even human mine detectors.

Ending rights violations is a key demand of the international community, which has embraced reforms in Myanmar since the end of outright junta rule in 2011.

A quasi-civilian regime led by former general Thein Sein has won praise and steered the country out of decades of isolation. Reforms include the release of political prisoners and welcoming the opposition party of Aung San Suu Kyi into parliament.

All of those freed were recruited as children, but some have since become adults.

The UN also voiced concern that seven armed ethnic rebel groups in the country continue to recruit children into their ranks and called for an end to the practice.

“It will not be possible to build a new Myanmar without ending the use and recruitment of children by the Tatmadaw and non-state armed groups once and for all,” Bainvel said.

Myanmar has been gripped by a number of civil conflicts with ethnic minority groups seeking more autonomy since independence from British colonial rule in 1948.

The current government has reached tentative peace deals with most rebel groups, but a nationwide ceasefire has so far proved elusive.