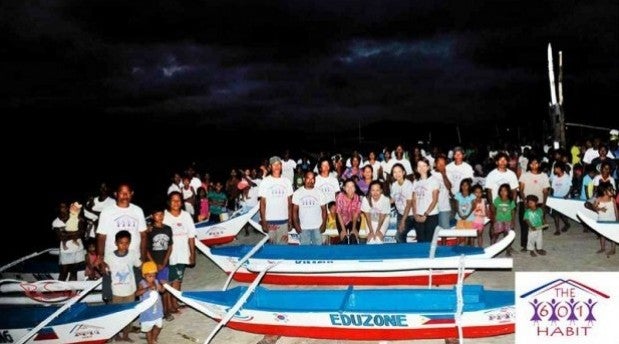 MEMBERS of the Seoul-based 601 Habit social group turn over 26 fishing boats to residents of Barangay Malangabang in Concepcion town in Iloilo province. PHOTOS BY PONG SERDENA/CONTRIBUTOR

ILOILO CITY—When typhoon survivor Sonny Ciriaco told the Inquirer that fishermen like him would rather have new boats than food and housing aid, he did not know that his appeal would be heard some 3,000 kilometers away.

Ciriaco, in an interview with this reporter in Concepcion town in Iloilo province on Nov. 11, or three days after Supertyphoon “Yolanda” struck, aired his appeal for boats after the supertyphoon destroyed or damaged almost all of the fishing boats in the island-village of Malangabang.

“We need help to have new boats first. We can still live in shanties or tents but we cannot survive without boats and gear,” he had told the Inquirer moments after he and other villagers arrived at the mainland to look for food and other assistance.

Raul Hipolito, who was with Ciriaco, had also said the villagers could not survive if they could not fish again.

Unknown to Ciriaco and Hipolito, a group of Seoul-based Filipino women had read on Nov. 14 the Inquirer online article about their plight.

The article inspired members of The 601 Habit to help fishermen who lost their boats rebuild their lives, according to Wendy Palomo, president of the social group and a native of Iloilo.

The group, composed of 12 women, including housewives and professionals, launched The Lifeboat Project and sought donations from legislators, business people, corporations and other groups and individuals in South Korea. The group is named for the number of the apartment where the group regularly holds their meetings.

“This project was inspired by the dignity that the group of fishermen from Northern Iloilo showed when they asked for the means to continue feeding their families, rather than asking for aid,” Palomo said.

“They may not be rich but they have always been self-sufficient. They have not begged but this devastation has reduced most of them to begging for aid. The least that we can do is give them back their tools to reclaim the dignity of their existence,” she said.

Malangabang, which has a population of 4,200, is one of the areas worst hit by Yolanda in Concepcion, a coastal town about 109 km northeast of Iloilo City where fishing is the main source of livelihood.

The 601 Habit had held fund-raising campaigns for victims of the supertyphoon by selling Philippine products.

In their boat project, they reached out to various companies and groups through  direct campaigns and their Facebook page and website. They had the Inquirer article translated into Korean to reach out to more donors. 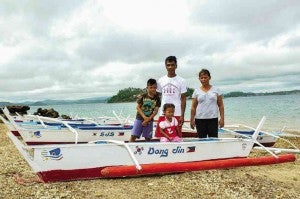 A FAMILY in Estancia town in Iloilo province receives a fishing boat donated by the Seoul-based 601 Habit social group.

Palomo said the project drew overwhelming support from both the Filipino community and Koreans.

To reach out to as many beneficiaries as possible, the group decided to donate nonmotorized bancas about 10 to 12 feet long, which cost P5,000 each. Palomo contacted Ciriaco, also a village councilman, and with his help identified the beneficiaries.

“We preferred to reach out and turn over the donations directly to the beneficiaries because of the urgency of the situation and because the donors wanted to see where their assistance was going,” Palomo told the Inquirer.

Ciriaco said some of the villagers preferred motorized boats so they could go and fish farther in the sea. But he said the boats were adequate for line fishing, and beneficiaries could later add a motor and propeller once  they    have the means.

On Dec. 28, Palomo along with Lee turned over 26 boats to beneficiaries in Barangay Malangabang in a simple ceremony.

The boats, made by local boat-makers and fishermen, were painted with Philippine and South Korean flags, the logo of The 601 Habit and an inscription preferred by the donor, including his or her  name or a saying.

The group has donated a total of 73 boats to fishermen in Concepcion, Estancia and San Dionisio towns in Iloilo and Barangay Banago in Bacolod City.

Palomo said they were also planning to donate boats in other areas.

Ciriaco said they were grateful for the help from people they did not know and had not heard of before.

“We did not imagine that they would learn about us and heed our appeal,” he said.