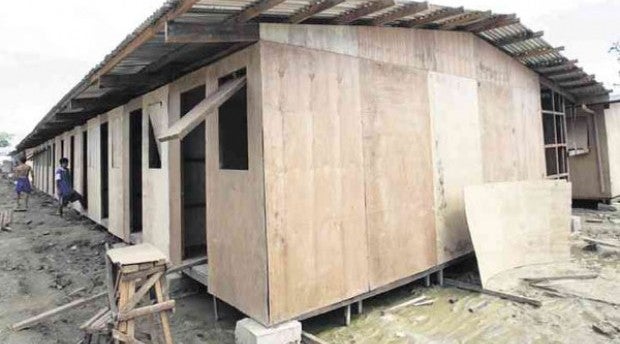 TACLOBAN CITY—Amid the controversy hounding the construction of bunkhouses for survivors of Supertyphoon “Yolanda,” a public works official announced plans to build 247 more bunkhouses at a cost of more than P200 million in Yolanda-stricken areas in Eastern Visayas.

Rolando Asis, regional director for Eastern Visayas of the Department of Public Works and Highways (DPWH), said the construction of the additional bunkhouses was in response to requests by local government units in the region.

He said people displaced by the storm had also expressed preference to stay in bunkhouses rather than tents.

Asis, however, could not yet say when the DPWH would start building the additional bunkhouses, as funding would have to be approved by the DPWH central office.

The construction of bunkhouses for Yolanda survivors came under fire due to allegations of overpricing and of the bunkhouses being substandard.

Of the 247 additional bunkhouses planned in Eastern Visayas, 180 will be built in Tacloban City, 28 in Palo town, 35 in Eastern Samar and four in Samar.

At least 222 bunkhouses have been built in the region costing more than P185 million.

Bunkhouses that are existing or are under construction are made of galvanized iron sheets, plywood and coconut lumber, and measure 8.64 square meters each. The planned additional bunkhouses, according to Asis, would be double the size of existing ones.

Federico Anido, Tacloban City Disaster Risk Reduction and Management Council officer, said he had heard of proposals to build more bunkhouses for Yolanda survivors in the city on top of the 51 originally proposed and welcomed it.