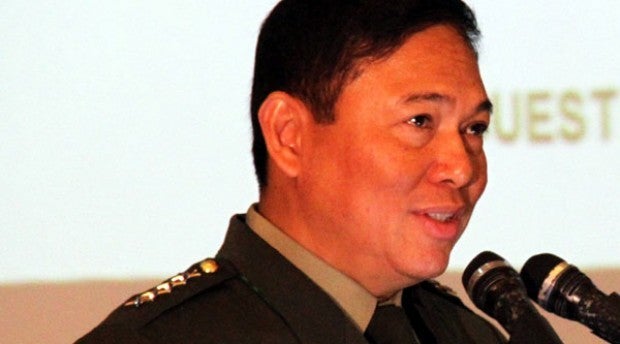 NUEVA ECIJA, Philippines – The Armed Forces of the Philippines Chief of Staff, General Emmanuel Bautista, extoled the Special Operations Command for its exemplary work in keeping the country safe during the unit’s 23rd anniversary celebration at Fort Magsaysay in Nueva Ecija Thursday.

Still, Bautista urged OCOM to stay ahead of the threats and foil plots that could hamper the country’s security and stability.

“Our nation is more secured and the AFP is more respected,” Bautista said in his speech during the celebration.

“You have ensured that the Philippines will no longer be a safe haven for terrorists,” he said as he lauded the unit after its operations thwarted rogue members of the Moro National Liberation Front who attacked Zamboanga in September last year.

The AFP chief also praised SOCOM for its prompt disaster response to the Bohol-Cebu deadly earthquake  and  Supertyphoon “Yolanda.”

“You are the most admired and respective fighting force.”

Read Next
Nursing exam topnotcher: ‘When you dream, dream big’
EDITORS' PICK
NUSTAR Resort and Casino: Cebu’s next lifestyle and leisure gem
EDITORIAL: Solo parents deserve more
Enjoy the best of city living at SMDC’s Fame Residences
Step up your vlog game with vivo’s newest smartphone
No more need to quarantine foreign arrivals if fully vaxxed
Guanzon: Senator behind delay in Marcos DQ case
MOST READ
Guanzon to Bongbong Marcos camp: How do you know I had ‘minority opinion’ on DQ cases?
Guanzon gives Ferolino until Monday to release reso on Bongbong Marcos’ DQ cases, or else
Guanzon: Senator behind delay in Marcos DQ case
Marcos a no-show in another GMA interview
Don't miss out on the latest news and information.