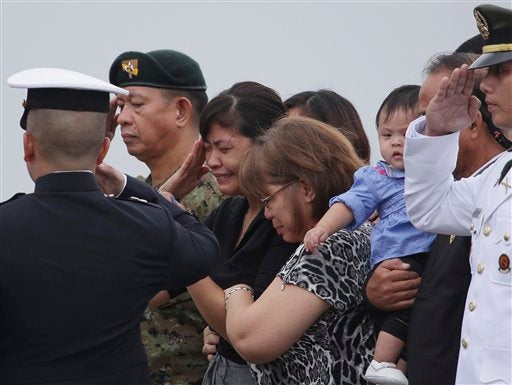 Navy Lieutenant Aemy Leslie Campos, widow of First Lieutenant Francis Damian who was killed during an operation against Muslim rebels in Zamboanga province, breaks into tears as she salutes in front of her husband’s coffin at Villamor Air Base in Pasay on Wednesday. AP Photo

MANILA, Philippines – First Lieutenant Francis Damian had a chilling premonition that he will not live to see the end of the bloody standoff in Zamboanga City.

“Ma’am, I want you to know that whatever happens to me, this is the fate I chose,” recalled one of Damian’s friends the last time they saw each other.

“That’s how you can see how dedicated he was,” Captain Marie Khathareen Orong (Medical Corps), Command Surgeon of the Special Operations Command (SOCOM), told INQUIRER.net in a phone interview on Tuesday.

Orong said he last saw Damian last Friday at the SOCOM Forward Base at the Western Mindanao Command in Zamboanga City.

Damian was the third junior officer to be killed in the ongoing clashes between government forces and members of Moro National Liberation Front in Zamboanga City. The siege entered its 16th day on Tuesday, with 13 troops killed from the military side.

“He went there to pick up his things and to see his wife, and I also saw him there,” Orong said, adding that Damian’s wife was also his classmate and a member of the Philippine Military Academy 2007.

Orong said she had known Damian for over a year. They both took up Basic Airborne Course, a military training for paratroopers held at Fort Magsaysay in Nueva Ecija which started in July and ended last week. She did not get to attend graduation last Thursday because she had to leave for Zamboanga City. Damian, meanwhile, flew there via an Air Force C130 on Friday, a day after graduation.

“He volunteered to be deployed in Zamboanga,” she said.

A military personnel is usually granted an academic break for about 10 days after finishing a course, a privilege that Damian apparently skipped.

“Ever since he was very eager to be with the Philippine Army. He had full of eagerness to serve, ” said Lieutenant John

Herbert Mananghaya, a classmate of Damian. He was a Delta-mate or company-mate at PMA; they stayed at the same barracks and quarters for four years.

“He had a very happy disposition, [he was] strong and a promising leader,” Mananghaya said, who was now with the Philippine Marines. 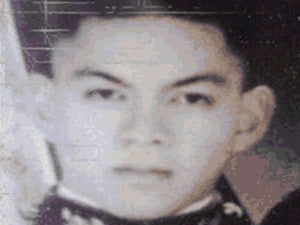 Mananghaya described Damian as “a very loving son” to his parents. His father, a retired police officer, also graduated from PMA.

The slain officer’s widow, Navy officer Lieutenant Junior Grade Leslie Campos- Damian, who was also assigned in Zamboanga City, was “still at a loss,” said Mananghaya, but said she was surrounded by her friends and family.

They have a daughter who is barely a year old.

Damian was killed after sustaining a gunshot wound to the head in Tuesday’s clash with MNLF in Sta. Barbara, contrary to early reports that he was wounded last Monday.

He died a few hours after he was brought to Ciudad Zamboanga Hospital.

The 28-year-old officer was assigned with the Army’s 3rd Light Reaction Company of the SOCOM. He was also a member of the Scout Rangers.

The fallen heroes of Zamboanga City