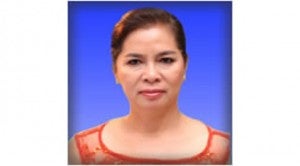 MANILA, Philippines—A lawyer and radio host asked the House of Representatives on Wednesday to unseat one of its leaders, Assistant Majority Leader Victoria Noel, for not having a certificate of proclamation from the Commission on Elections.

In a letter addressed to Speaker Feliciano Belmonte, Brigido Dulay cited a statement made by Comelec Chairman Sixto Brillantes during an interview on his DWIZ radio program that he had not issued any certificate proclaiming the winner of An Waray’s second representative in the House.

Dulay said the matter came up when he asked Brillantes about the Comelec’s compliance with the Supreme Court’s ruling directing it to proclaim Abang Lingkod as one of the winning party list groups in the May 2013 election.

The transcript provided by Dulay quoted Brillantes as saying that there could be a problem because the seat that would go to Abang Lingkod has been filled up by Noel, the second An Waray nominee.

Brillantes said the Comelec did not issue a certificate of proclamation for the second House seat of An Waray and that it was the House itself that filled this slot.

Given this, the House should not recognize Noel, said Dulay.

“It is our humble opinion that without the necessary Certificate of Proclamation from the Comelec en banc, there is no legal basis for Ms. Noel to sit as a member of the HOR (House of Representatives),” he said in his letter. “May we, therefore, as a taxpayer and public interest advocate, ask the House leadership to rectify this grievous error by revoking the oath of office administered to Ms. Noel and dropping her name from the roll of members of the House?”

He contended that if Noel illegally assumed office, disbursements made by her office would be void and the money must be returned to the public coffers. He asked the House to provide him with the list of salaries, allowances and other monetary benefits that Noel or her office received.

Noel’s brother, former An Waray Rep. Florencio Noel, the group’s chair, said the group has a certification from the Comelec en banc proclaiming the party list and saying it was entitled to two seats. But he acknowledged that there was no certificate of proclamation for Victoria Noel.

According to him, the Comelec issuance saying the party list should have two seats was still valid.

“If it’s not legal, why did the House accept this?” he said.

Belmonte said on Wednesday he would have Dulay’s letter studied.

An Waray representative shocked by link to pork barrel scam

Buhay, An Waray partylists: Why us?

An Waray representative denies 2nd nominee was pressured to resign