No birthday bash for jailed Napoles 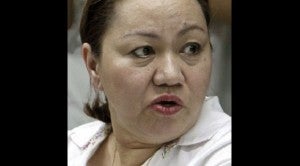 SAN PEDRO CITY, Laguna, Philippines—Unlike the extravagant parties she threw the high and the mighty, Janet Lim Napoles had a subdued 50th birthday on Wednesday.

The alleged mastermind behind the P10-billion pork barrel scam spent “just an ordinary day” in her place of detention at Fort Sto. Domingo in Sta. Rosa City, Laguna, said the spokesperson of the Philippine National Police.

“She made no request for whatever she might have wanted to do. Besides, it would not have been allowed anyway,” said Chief Supt. Reuben Theodore Sindac.

Napoles, who is detained on a charge of serious illegal detention of her former employee, Benhur Luy, surrendered to President Benigno Aquino III in August last year in Malacañang.  She has been detained at the PNP-Special Action Force training camp since September.

During the holidays, Napoles’ request to extend the visitation hours on Christmas and New Year was granted by the PNP, but it limited her visitors to close family members, priests and lawyers.

Sindac said in a phone interview there was no request to extend visiting hours for Napoles on Wednesday.

After being named a prime suspect in the misuse of the congressional Priority Development Assistance Fund, photos of Napoles hobnobbing with lawmakers began to surface on the Internet. The lavish lifestyle of Napoles’ 21-year-old daughter, Jeane, abroad also became the subject of public scrutiny.

Napoles, a businesswoman, also used to throw parties, complete with caterers and air-conditioned tents, every All Soul’s Day at her mother’s mausoleum at the upscale Heritage Memorial Park.

But on her birthday, Napoles was served “ordinary” meals, said Sindac. She had ham and egg for breakfast, pork stew for lunch, and milkfish cooked in vinegar and ginger for dinner.

A day before her birthday, Napoles was visited by her husband Jaime and relatives James and Christopher Napoles. Also on the list of her visitors on Tuesday were a priest named Anthony Bautista and three other persons named Aiza Macapatag and Stephen and Lanee, both surnamed David, said Sindac.

Sindac maintained that no special treatment was being given to Napoles, who remained under tight security even on special occasions.

Napoles given no special meals on 50th birthday in jail

Read Next
Vietnam to sell stake in airline, other companies
EDITORS' PICK
What to watch out for when selecting a video surveillance solution
Heads may roll at BOC, says Palace if sugar smugglers are allowed to use recycled import permits
vivo brings to the Philippines a powerful smartphone with a slimmer body, the vivo Y02s for only PHP 6,499
Palace: Biggest supermarkets in PH commit to sell sugar at P70 per kilo
DOH reports increase in daily COVID-19 deaths, mostly unvaxxed
House energy committee chair Arroyo bats for cheap electricity
MOST READ
DepEd to give teachers P5K cash allowance within first week of classes
Alyssa Valdez to miss Creamline’s AVC Cup campaign
Jordan Clarkson arrives in Manila to bolster Gilas Pilipinas
NIA welcomes former DENR exec as its full-fledged administrator
Don't miss out on the latest news and information.