Napoles given no special meals on 50th birthday in jail 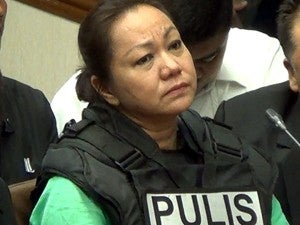 Napoles, the alleged mastermind behind the billions-worth pork barrel scam, turned 50 and contrary to her lavish parties before, she marked her birthday inside the Fort Santo Domingo detention facility in Santa Rosa, Laguna.

No expensive dishes were on the menu for Napoles’ birthday. She was served ham and egg meal for breakfast, pork sinigang for lunch and paksiw na bangus (milkfish cooked in vinegar, garlic and salt) for dinner.

“There was no special request from Napoles to celebrate her birthday. She did not even ask to extend the visitation hours,” Sindac said.

On the eve of her birthday, the beleaguered businesswoman was visited separately by her husband, Jaime, sons Christopher and James, a certain Father Anthony Bautista and four others.

In a text message to reporters, the police said the blood pressure of Napoles was stable at 120/70.

In October last year, she was rushed to a hospital near Fort Sto. Domingo as her blood pressure shot up to over 180/100 allegedly triggered by her claustrophobic disorder.

Napoles is the center of pork barrel scandal that erupted in July in a series of exposés by the Philippine Daily Inquirer.

The Priority Development Assistance Fund scam involved Napoles and some government officials and lawmakers who raked in kickbacks after diverting billions of pesos to dummy non-government organizations through ghost projects. The businesswoman allegedly masterminded the scheme.

Almost a month after, Napoles surrendered to no less than President Benigno Aquino III. She was then brought to Makati City Jail but was transferred to Fort Sto. Domingo “for security purposes.”