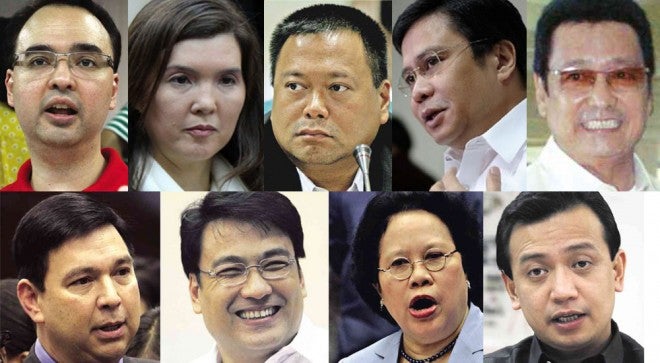 Nine senators who had their pork barrel totaling P1.8 billion realigned to projects and the calamity fund in the 2014 national budget were well within their rights to do so, Sen. Francis Escudero said on Wednesday.

For instance, Escudero said, Sen. Jinggoy Estrada was doing his job when he introduced an amendment to allot his P200 million in Priority Development Assistance Fund (PDAF) allocation to three local government units [including Manila where his father is the mayor].

This came ahead of the implementation of the P2.265-trillion national budget, and hence, did not violate the Supreme Court decision striking down the 2013 PDAF as unconstitutional, according to the chair of the finance committee.

Even so, the final decision to release or not to release the fund allotted to the three local government units (LGUs) lay with the executive department, he said.

“In accordance with the powers of Congress, all of us can introduce an amendment. That’s our legislative power. If the President submits the budget, we can’t skirt our duty to amend it. What are we, a rubber stamp?” Escudero said by phone, chuckling.

As the pork barrel scandal roiled Congress, 15 senators opted to have each of their P200-million annual PDAF allocation deleted from the 2014 budget, as did Vice President Jejomar Binay.

That was P3.2 billion less than the House of Representatives-approved P2.268-trillion budget. In the end, both chambers approved a P2.265-trillion budget that President Aquino signed into law before Christmas.

The other nine senators decided to realign their respective allocations.

Escudero said Senators Ramon Revilla Jr., Lito Lapid and Antonio Trillanes IV decided to allot their PDAF to schools, hospitals and public works projects, while Estrada opted to have his allocated to the LGUs.

Based on data culled by the Inquirer from the 2014 General Appropriations Act, four senators allocated the funds to the following:

Sought for comment, Trillanes said he decided to realign his allocation to fund the scholarship programs of state universities and colleges, and support charity patients in public hospitals and the construction of barracks for soldiers affected by the abolition.

“Deleting it from the national budget will not allow me to do this unless I will realign funds from the budget of other government agencies,” he said in a text message Wednesday night.

In a text message, Budget Secretary Florencio Abad said the amount that Estrada realigned was approved by the Senate and adopted by the bicameral conference committee.

“They were introduced as amendments to the budget. As such, they will require a special budget request for their release,” said Abad.

While Abad could not verify the other realignments made by Lapid, Revilla and Trillanes, he said these would also be subject to the same treatment as Estrada’s realignments.

“We still have to find out where said PDAF allocations were realigned. And if indeed they were realigned, they are also subject to special budget request,” the budget secretary said.

In the House, Bayan Muna Rep. Neri Colmenares said he was surprised about Abad’s claim that the realignments would still need clearance from the Department of Budget and Management.

“The Supreme Court was not clear on whether lawmakers could realign the funds or not because it is clear that Congress has the power of  the purse and has the prerogative where government money should be spent. What it was clear on was that lump-sum items should be discontinued and that everything in the budget should be itemized,” Colmenares said in a phone interview.

He said the House practically realigned P930 billion worth of items in the 2014 budget, including the pork barrel, because it wanted to ensure that all expenses were itemized and not carried as lump sums.

“So why does the President have to give his clearance before releasing the funds realigned by the senators? This is still patronage politics, the PDAF was just converted into presidential pork,” he said.

Early on, all the senators agreed in a caucus “to respect what each senator wanted to do with the original PDAF allocation,” Escudero said by way of explaining the different modes taken by the senators in disposing of their pork barrel.

“The decision was not to put it to a vote, and to just let the senators decide, and be responsible for it,” he said.

The manifestations of the nine senators were carried out as amendments since the Senate did not follow the original House budget measure that realigned P25.2 billion in congressional PDAF, including the Senate’s portion, to five departments, Escudero said.

“I will contest the use of the word ‘insertion,’” he said. “We’ve been very transparent with everything.”

Escudero said Estrada’s identification of the LGUs did not violate the Supreme Court ruling that declared unconstitutional all provisions of the law that allowed legislators  “to wield any form of post-enactment authority” in the implementation of the budget.

“His identification of the LGUs does not violate the Supreme Court decision. That’s part of our function in Congress. It’s well within our right to review and approve the budget. This is preenactment intervention,” he said.

“With the 2014 budget, there was no post-enactment intervention,” he added, referring to old practices by lawmakers in identifying projects and beneficiaries of pork barrel while the budget was being implemented.

Escudero said Estrada had “no say” at all in the implementation of the assistance to LGUs.

“It’s completely in the hands of the executive department, including the decision to release or not to release the fund, or to ask for a program of work. Completely, Jinggoy has no say in that,” he said.

Assistance to LGUs used to be a lump-sum item in the national budget, Escudero said.

In the 2014 budget, the Senate introduced a special provision specifying amounts for specific LGUs and requesting the Department of Budget and Management to provide data in cases where the recipient LGUs were not identified.

As far as he could recall, the budget allotted for assistance to LGUs in 2014 was roughly P300 million, including the P200 million from Estrada’s PDAF.

As for the rest of the nine senators, the projects funded out of their allocations were itemized in the 2014 budget, the senator said.

All the projects of the nine senators will be posted on the Senate website.

“Because of the controversies involving Senator Estrada, that’s why it’s raising some alarm bells. But what happened in the past has not been proven yet,” he said.

Estrada is facing a plunder complaint in the Office of the Ombudsman, together with Revilla and Juan Ponce Enrile, businesswoman Janet Lim-Napoles and 34 others over the P10-billion pork barrel scam.

Escudero said the Senate had been “very careful” not to violate the Supreme Court ruling and even quoted its decision on post-enactment intervention in the budget, and incorporated “transparency and accountability” provisions that would hold liable any official caught misusing funds.

“We removed all post-enactment interventions. Now they can’t remove from us the function of amending any bill, including the budget,” he said. “That power can’t be taken away.”

He advised the public to closely monitor the disposition of the funds.

“The control mechanism is not to have it released, or monitor the release,” he said.