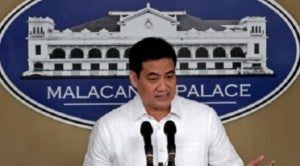 Malacañang on Wednesday said it was fully behind rehabilitation chief Panfilo Lacson’s ongoing investigation into the alleged collusion involving the construction of bunkhouses for typhoon victims in Leyte and Samar provinces.

“Yes, that is part of his process,” presidential spokesman Edwin Lacierda said in a press briefing when asked if the Lacson probe had the full backing of the Palace.

Part of the investigation covers the possibility that contractors did not meet specifications set by the government, giving rise to purportedly substandard bunkhouses.

But before Lacson could complete his investigation, Lacierda maintained that the structures—temporary shelter for an estimated 6,000 families—were “not substandard.”

“Let me be clear: It’s not substandard,” Lacierda said in a press conference, insisting that the Department of Public Works and Highways (DPWH) followed the Building Code.

Concern over subpar compliance with standards has been raised by a UN-led shelter group. The United Nations has issued an appeal for $791 million to the international donor community to help the Philippines in its rehabilitation and recovery program.

The DPWH is undertaking massive infrastructure rebuilding worth billions of pesos. Experts say that normal standards will not do if the country is to adapt to more violent storms expected in the climate change era. While at issue is temporary shelter two months after Supertyphoon “Yolanda” struck, a new template is expected of the government.

Public Works Secretary Rogelio Singson earlier said the government had begun putting up bunkhouses even before he spoke with “at least 10” experts from different international organizations.

He said the government later accommodated concerns raised by the housing experts, mainly by reducing by half the 24 families that were supposed to occupy bunkhouses composed of as many units.

The adjustment would now mean that 12 families would be staying in a much bigger unit of 17.28 square meters.

Lacierda said the government was concerned about the safety of the typhoon victims in the temporary shelters, and wanted to avoid “congestion.”

“We’re following our standards. We don’t necessarily have to follow international standards because our concern is safety, our concern is it should not be congested,” he said.

Architect and urban planner Felino Palafox Jr. on Tuesday questioned the quality of bunkhouses for victims of Yolanda.

“Would you want your family to live here?” he had said, referring to the Inquirer’s front-page photo of bunkhouses under construction. “It’s a fire hazard. There’s no privacy. The materials are so flimsy.”

Lacierda’s office on Wednesday released a statement purportedly coming from Palafox clarifying that the architect did not accuse the DPWH of “corruption.”

“I only commented on the shelters for survivors being undersized and substandard based [on] our international experience and standards,” Palafox said in his statement.

Palafox said he admired Singson’s “professionalism when he called me yesterday and admitted he was not made aware of the international standards” in the construction of temporary shelters.

“He himself went to the disaster [areas] to check and initiated to improve the designs and specifications based on international standards,” the architect added.

Palafox said in a telephone interview later Wednesday that a newspaper, not the Inquirer, misquoted him. “I’m not retracting. Any way you look at it, they’re substandard,” he said. “They are not fit for human habitation.”

Lacierda said President Aquino had received a copy of Singson’s report denying that the bunkhouses were “overpriced.”

But on Monday, Singson acknowledged that “there might be possibilities that some of the contractors may not have followed the specifications” set by the DPWH.

Lacierda said the President was still awaiting the results of Lacson’s own investigation.

“Whatever will come of the investigation, we’ll be able to determine … was there some anomaly that happened? And that would be fleshed out,” he said.

Samar Rep. Mel Senen Sarmiento on Wednesday defended Singson. “I don’t really believe there was overpricing. To me, that is reasonable. Nowadays, the costs of construction have become expensive,” Sarmiento said on the phone.—With reports from TJ Burgonio, and Joey Gabieta, Inquirer Visayas