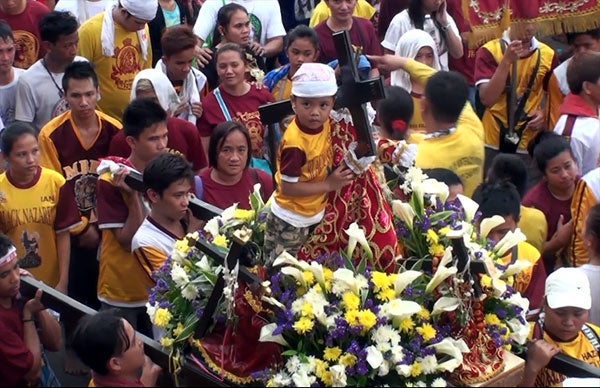 Valmoria said this would make it easier for authorities to look for children who would be reported lost.

“We would like to request the devotees not to bring infants (on Thursday) or kaya lagyan nila ng [or maybe they can put] contact number,” Valmoria told the reporters.

He also warned devotees against bringing firecrackers and pyrotechnics or they would be arrested.

The newly appointed NCRPO chief also advised devotees not to wear expensive jewelry to avoid falling prey to snatchers who will take advantage of the feast, where millions are expected to participate.

Like the military, Valmoria said they did not monitor any security threat. In 2012, President Benigno Aquino III himself warned against a possible terrorist attack that prompted government to order telecommunications firms to jam their signals, effectively disabling cellular phones, which could have been used to detonate bombs.

The NCRPO has been on full alert status since December and would last until this January when the Feast of the Sto. Niño would be celebrated on third Sunday of January in Tondo, Manila.

In previous years, the celebration of the feast of the Child Jesus was marred by injuries and some deaths, most of which resulted from heated arguments that broke out during drinking sessions.

“The personnel involved in the security will not only come from the Manila Police District. We also have resources, like vehicles, that will be sent out to support the MPD,” he said.