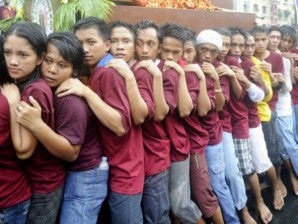 Roman Catholic devotee carry a religious replica icons of the Black Nazarene during a procession in Manila. FILE PHOTO

MANILA, Philippines – Security for the Feast of the Black Nazarene Thursday is in place as authorities assured that there were no threats monitored leading up to one of the major religious events of this largely Catholic country.

“As of last briefing today (Wednesday) we have not monitored any threats that will disrupt the activities of the Black Nazarene,” Colonel Manuel Santiago, commander of the Joint Task Force National Capital Region, said Wednesday.

Chief Superintendent Carmelo Valmoria, chief of the National Capital Region Police Office (NCRPO), told reporters during the Philippine National Police annual New Year’s call that the deployment, to include regional policemen, was “enough” but refused to disclose the exact number.

The lead unit in security operations is the Philippine National Police.

Valmoria said that aside from the Armed Forces of the Philippines, security would also be provided by the Philippine Coast Guard, Bureau of Fire Protection, Department of Health, Manila local Government Units, and volunteers from the private sector.

He added that there would be a unified command center by the PNP in “significant areas”. He did not elaborate.

Military troops will be on standby but seven Explosive Ordnance teams with K-9 and eight ambulances will be deployed, Santiago said.

In 2012, President Benigno Aquino III warned of a terror threat before the Black Nazarene
procession.

The event was not cancelled, but the government asked telecommunication companies to jam phone signals along the Nazarene’s route.

Cell phones have been known to detonate bombs.

Did You Know: The Black Nazarene