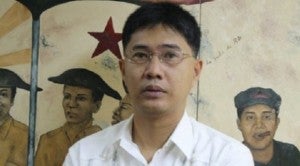 LUCENA CITY, Quezon–The leader of a militant farmers’ group accused the Aquino administration on Wednesday of using the alleged rice smuggling by one David Tan as a ruse to divert public attention from the rice importation scandals at the National Food Authority.

“This David Tan issue should not be allowed to be a cover-up for the overpriced rice importation of the NFA,” Flores said in a telephone interview.

Flores said both issues about Tan and NFA’s overpriced rice importation magnified the proliferation of corruption under the Aquino administration.

He asked the NFA to stop its “legalized smuggling through its policy of rice importation” which he said had emboldened rice smugglers like Tan.

Flores asked the government to unmask “Tan’s handlers” in the bureaucracy.

In a statement, activist lawyer Argee Guevarra, who had filed plunder charges against Agriculture Secretary Proceso Alcala and NFA Administrator Orlan Calayag, also alleged that the surfacing of Tan’s name in rice smuggling activities was part of a grand design to divert the public’s attention from the NFA  rice smuggling.

Late last year, Guevarra was the one who first blew the whistle on alleged irregularities in the NFA’s government-to-government importation of rice from Vietnam, which he said was overpriced by more than P450 million.

“The witch hunt for a certain David Tan is obviously part of a grand plot to instill fear among legitimate rice traders who can be accused of being Tan himself,” Guevarra said.

He added: “Anyone can be David Tan because he is not a person but a fictional character created to ensure Alcala et al’s absolute control of the industry. Who wants to be accused of being David Tan?”

Guevarra said Tan has become “the contemporary, nominal bogeyman” of rice price manipulators, smugglers and importers whether committed by private rice traders or by the NFA.

He said with the devastation of rice fields caused by typhoon Yolanda, the NFA has approved the importation of another 500,000 metric tons of rice through the government-to-government import scheme.