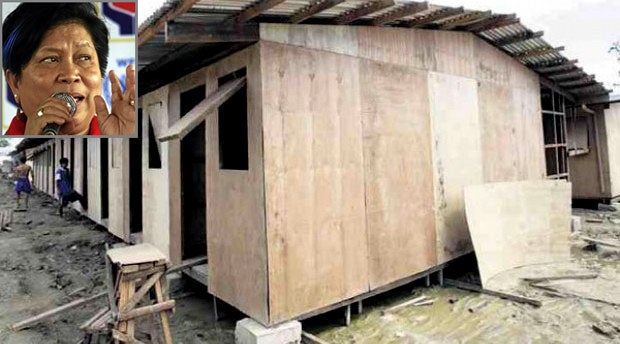 MANILA, Philippines – At least two international  groups have allegedly denied saying that the bunkhouses  being built for survivors of Supertyphoon “Yolanda” were either overpriced or  substandard as reported in the media, Social Welfare  Secretary Dink Soliman said on Wednesday.

The IOM, she said, specifically made this clear during the “shelter cluster” meeting Tuesday.

Soliman said the IOM is a co-convenor of the Department of  Social Welfare and Development (DSWD) on Camp Coordination and Camp Management, which was  allegedly the source of  such media reports.

“Kinaka-clarify nila (IOM) na wala silang sinasabi…na substandard or overpricing. Ang kanilang iminumungkahi is to review yung size at saka yung pagkakaroon ng mas malayong cooking area. This is all in Tacloban,” she said in an interview with Radio Inquirer 990AM.

(They clarified that they did not make any report that it was substandard or there was overpricing. What they are recommending is to review the size and the distance of the cooking area. This is all in Tacloban)

Singson  had repeatedly denied that the temporary shelters were  overpriced and  even offered to resign if proven otherwise.