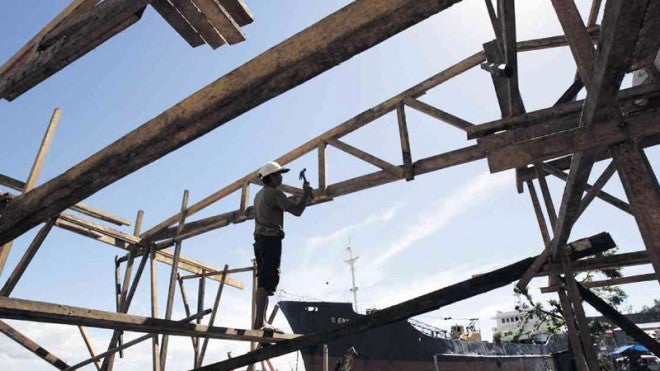 WHAT BUNKHOUSE? A resident rebuilds his home in Barangay Anibong in Tacloban City on Saturday, almost a month after Supertyphoon “Yolanda” and its storm surge flattened communities in the Visayas and killed thousands of people even as a beached ship remains in the area. NIÑO JESUS ORBETA

They are cramped, have thin plywood walls and two-slope roofs that could be easily blown off by strong storms.

Architect and urban planner Felino Palafox Jr. on Tuesday shared his observations of the bunkhouses built for victims of Supertyphoon “Yolanda” (international name: Haiyan) in Tacloban City, confirming an international assessment these were substandard.

“I’m reminded of the saying, ‘We build monuments for the dead but we can’t even provide decent housing for the living,’” he said on the phone.

Palafox, who accompanied rehabilitation czar Panfilo Lacson during a visit last Dec. 13 to the typhoon-ravaged city, said the bunkhouses have 1/4-inch plywood walls, roofs with two slopes and are cramped.

It was clear the builders violated the building and fire codes of the country, he said.

“Would you want your family to live here?” he said, referring to Tuesday’s Inquirer front-page photo of a row of bunkhouses made up of thin plywood and GI sheets. “It’s a fire hazard. There’s no privacy. The materials are so flimsy.”

Arjun Jain of the United Nations High Commissioner for Refugees (UNHCR) said on Tuesday: “I think the donors are fully committed and the UN is fully committed to helping the people of the Philippines. That support is going to be unwavering. That is for certain.”

“As far as the bunkhouses are concerned, we have received all assurances from the government that international specifications will be met, especially through the redesign of some of the bunkhouses. And we are very reassured by this commitment of the government, and we will continue to support all the relief efforts including the early recovery efforts,” Jain told the Inquirer.

He made the statement when reached by phone on his way back to Tacloban, where he supervises UNHCR operations in the typhoon-ravaged areas, particularly the provision of emergency shelter materials, cooking utensils and solar lanterns, among others.

“We have discussed with the government the standards that should be met in redesigning the bunkhouses. The government has taken all our recommendations on board and they have assured us of the changes,” Jain added.

The Nov. 8 typhoon—the worst to ever hit the country—damaged or destroyed some 1.1 million houses, leaving some 4.1 million people homeless.

The bunkhouses are temporary shelters, the government has stressed. The timetable for building permanent housing remains unclear and depends on a host of issues, including the availability of land for relocation sites.

No-build zones at least 40 meters from the coastline at high tide have been ordered. Public Works Secretary Rogelio Singson told reporters on Monday he did not expect that rebuilding the ruined communities could be completed in two years.

In the interview with the Inquirer, Palafox said he was puzzled why bunkhouses were built with two slopes instead of four slopes, when homes with such a design were wrecked by the typhoon.

“Why repeat the same mistake? We’re supposed to build back better,” he said.

By this time, nearly a month after that visit, Palafox believes that the Department of Public Works and Highways (DPWH) had fixed the temporary shelters in order to comply with international standards.

An international shelter group reported that the bunkhouses being developed by the DPWH did not comply with internationally recognized standards and best practices.

The Camp Coordination and Camp Management had raised concerns, including cramped spaces, lack of ventilation, risk of fires, and safety and security of the occupants.

Palafox said each bunkhouse should be at least 20 square meters (sqm), with three bedrooms, and if possible, a “kitchen garden.”

He stressed that young girls should not share a room with the men in the house “because in crisis, the biggest victims are the women, children, specifically young girls.”

By kitchen garden, the architect was referring to a small plot at the back of the kitchen where the family could grow vegetables.

If it’s a permanent shelter, it should be at least 40 sqm, he said. “There should be an incremental approach to housing. The house should grow as the income grows, or as the family grows.”

On top of concerns on the substandard bunkhouses, Lacson said he had begun investigating the possible collusion between contractors and a local politician to profit from the construction of bunkhouses.

Lacson said he had tapped the Philippine National Police Criminal Investigation and Detection Group to look into reports that the contractors and the politician were pocketing 30 to 35 percent commissions.

He said charges would be filed against these personalities with the Office of the Ombudsman if evidence so warranted.

Palafox declined to comment on charges that the bunkhouses were overpriced, saying these were now being investigated by Lacson.

“At the least, the contractors and consultants should be identified,” he said.

Assistant Secretary Jesus Domingo of the Department of Foreign Affairs Office of the United Nations and Other International Organizations said he had so far not encountered any query from foreign partners on the issue.

The European Union’s delegation in Manila also said on Tuesday that its assistance for Philippine typhoon relief was not disbursed for the construction of bunkhouses.

Its humanitarian aid review this month will also not cover the issue and is part of its regular aid monitoring process.

Sen. Loren Legarda said on Tuesday that if the government aimed for a resilient recovery, the structural integrity of homes, buildings and other structures “should not be compromised.”

“We need to rebuild communities with the confidence that we are not rebuilding the risks again. We need to ensure that the construction of homes, even the temporary shelters, will be on safer ground following sound construction standards,” said Legarda, chair of the Senate climate change committee.

After all, Yolanda has become the new benchmark for disaster prevention, and the country should raise the standard for building structures, she said.

Sen. Joseph Victor Ejercito on Tuesday vowed to call for an inquiry into reports of overpricing of bunkhouses in the Visayas as he appealed to officials and contractors not to take advantage of the typhoon victims.

The typhoon victims “needed all the help they can get,” he added.