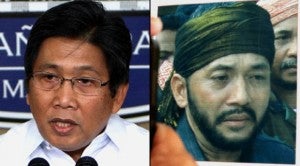 Coloma said that they have not even received confirmation that Malik indeed died of diabetes last November, as mentioned in a Philippine Daily Inquirer article in December.

(Based on what I know, there is no confirmation yet on his death. We will get an update from the Armed Forces of the Philippines.)

The Secretary pointed out that the cause of rebellion is not affected by the life or the death of a single individual.

(Because if there is a reason for an uprising or a rebellion, it is not affected by the life or death of a single individual only.)

(We believe, that for a meaningful pursuit for peace, we need to identify the root of discontent or rebellion.)

Coloma also said authorities are still looking for Misuari, who has a warrant of arrest issued against him. He is facing charges for rebellion and violation of humanitarian laws because of the Zamboanga City siege.

The Misuari faction of the MNLF is said to have launched the so-called Zamboanga City siege because of the ongoing negotiations between the Philippine government and the Moro Islamic Liberation Front. The group believes the Framework Agreement on the Bangsamoro would replace and water down what they have achieved through their own peace agreement with the government in 1996.