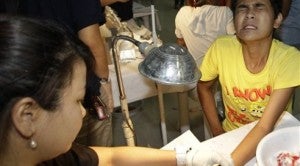 According to the “Aksyon: Paputok Injury Reduction 2013” report of the DOH-National Epidemiology Center, which started recording such injuries last Dec. 21, the number of people injured had increased from 244 to 262 as of 6 a.m. Tuesday.

The latest figure was 17 percent higher than the average for the years 2008-2012. It was 27 percent more than the number of injuries recorded during the same period, when 207 cases were registered.

Assistant Health Secretary Enrique Tayag earlier said the number might surpass previous records as health authorities braced themselves to handle 50 to 80 injuries every hour during the 12-hour period from 6 p.m. of Dec. 31 to 6 a.m. of Jan. 1.

Among the new victims was a 40-year-old woman who was hit by a bullet on the left  thigh while she was standing in front of her house in Barangay (village) Holy Spirit in Quezon City.

“Barangay Holy Spirit was listed as one of most dangerous in Quezon City,” Tayag said.

The health department had earlier released a list of the “most dangerous” places based on the number of firecracker-related injuries over a three-year period.

Most of the cases (127 or 48 percent) were in the National Capital Region, majority of which occurred in the City of Manila.

Of the 253 firecracker-related injuries, 164 or 65 percent were caused by “piccolo,” an illegal type of firecracker.

The DOH report said an 8-year-old boy from Cebu lost his right hand while lighting a firecracker.

The health department is expected to conclude its count of firecracker-related casualties on January 5.

DOH calls for alternative noise makers as 21 hurt by firecrackers

Read Next
3 hurt by hostage-taker in Camarines Sur
EDITORS' PICK
Metro Manila’s COVID-19 cases on downward trend, but surge not over — OCTA
Unleash the photographer in you this World Photography Day with vivo smartphones
What to watch out for when selecting a video surveillance solution
Palace warns sugar hoarders after raid on Pampanga warehouse
House energy committee chair Arroyo bats for cheap electricity
Look Through: The fate of impounded stray dogs
MOST READ
DOJ indicts bank officer in $2.1 billion Wirecard fiasco
LOOK: Miel Pangilinan dazzles in glittery pre-debut shoot
Peso loses ground vs US dollar
August 19 a special non-working holiday in Quezon City
Don't miss out on the latest news and information.