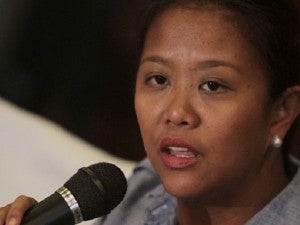 MANILA, Philippines – Senator Nancy Binay is hoping that the “negatives of the past” and the “darkness and the gloom of yesterday” be put aside as the country welcomes the New Year.

“The New Year brings with it the overflowing hope and joy from our Lord to us all,” she said in a statement released Monday.

“Let us discard the negatives of the past, the darkness and the gloom of yesterday and let us positively welcome the new day, the New Year,” she said.

Binay cited the devastation caused by Supertyphoon Yolanda (international name Haiyan) last November 8 and the huge task of rebuilding the cities and towns across the Visayas.

More than 6,000 people have been killed by Yolanda. The National Disaster Risk Reduction and Management Council continues to count the dead.

“In 2014 we face the daunting yet achievable task to rebuild and rehabilitate communities and lives. Through our collective strengths and a common vision, we will triumph,” Binay said.

The Binay family was recently involved in an incident with security guards of a gate in Dasmariñas Village, Makati. The guards had prevented the convoy carrying Makati mayor Junjun Binay and Senator Nancy Binay from exiting the subdivision through Banyan gate because it was closed after 10 p.m.

Mayor Binay then called for police and had three security guards brought to the police station but were released after a few hours.

Binay spokesman Joey Salgado had said that the security of the mayor was threatened because the guards had allegedly surrounded the convoy.

The Dasmariñas Village Association (DVA) said in a statement that the Binays were not exempted from the village rules.

DVA stood by the actions of the security guards and said that they did nothing wrong.