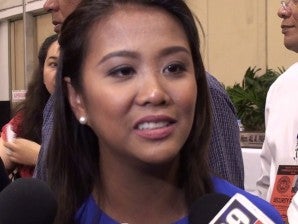 Sen. Nancy Binay: This is not about me. RYAN LEAGOGO/INQUIRER.net FILE PHOTO

MANILA, Philippines—Maligned in the social media for her refusal to debate during the campaign period, Sen. Nancy Binay has filed a bill penalizing violence against women committed by persons close to them through the use of the Internet.

Binay said the bill was not a way of getting back against her online critics who posted blogs and memes, some of which she described as foul even in the context of an election period characterized by mudslinging.

“First of all, this bill is not about what I have experienced during the campaign. What this bill addresses is the violence committed online by people who have a personal relationship with the victim,” Binay told reporters.

The comedian earlier criticized Binay’s candidacy despite an apparent lack of experience in a televised news conference for his concert. The tirade was perhaps the most well-known remark against the opposition candidate.

Binay’s electronic violence against women bill actually seeks to penalize, among other things, the uploading of sex videos and nude photos of women by persons close to them such as their husbands and boyfriends.

Binay clarified that there is already an existing Violence against Women and Children Act of 2004 or Republic Act 9262.

“During that time, electronic violence wasn’t included. So the bill I submitted includes this form of violence through new technology,” she added.

Binay said she already heard criticisms that she was getting back at Internet bullies through a proposed measure that might abridge freedom of expression.

“This is not about me,” Binay said, saying it is a measure for the protection of women. “Surely, you’ve seen what has happened these past years, the sex videos posted on the Internet. This is their protection so they can have a way to file a complaint,” she added.

She said offenders can be penalized up to P300,000 but not more than P500,000, depending on the gravity of distress caused to the victim. The bill also provides a protection order to prevent further harm and distress to any woman and her child.

In a statement, Binay said most of the cases of online bullying, cyberstalking and other forms of digital harassment are perpetrated by people close to the victims.

“Being bullied or harassed by a known perpetrator, or someone close to you, has a serious emotional and psychological impact than being hassled by a stranger,” Binay said.

Binay said that while the Anti-Photo and Video Voyeurism Act of 2009 sought to prevent further acts of such nature from permeating the various medium of information and communications technology (ICT), the law failed to address the form of violence brought on victims of such scandals, by reason of their special relationships with their assailants.

“Although the VAWC Law already protects women and children against physical, sexual, emotional, economic and psychological abuses, it does not include other forms of digital harassment like cyberbullying,” Binay said.

Binay said the bill seeks to regulate the exploitative and irresponsible use of social media that has become “a mode of disseminating scandals involving both television personalities and private individuals.”

“Since the enactment of RA 9262, women and their children have been provided with additional alternatives and protection against abusive conduct and violence. However, the law has not taken into consideration the prevalent and widespread reach of the Internet and communication technology,” the neophyte senator said.

Binay’s bill defined “electronic violence” as any act involving the exploitation of data that “can cause or is likely to cause mental, emotional and psychological distress or suffering to the victim.”

Binay said this can involve the unauthorized recording, reproduction or distribution of videos showing the victim’s private areas; uploading or sharing any form of media with sensitive and indecent content without the victim’s consent; harassment through text messaging, electronic or any other multimedia means; cyberstalking, including the hacking of personal accounts on social networking sites and the use of location trackers on cellular devices and the unauthorized use of the victim’s identity (pictures, video, voice, name) for distribution that can harm the victim’s reputation.