Number of victims from stray bullets rises to 10–PNP 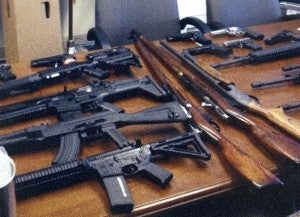 MANILA, Philippines–With a few days more before the New Year, the Philippine National Police said Saturday the number of victims from stray bullets rose to 10.

Senior Superintendent Wilben Mayor, PNP spokesman, said that as of 12 noon, three people have been wounded in Metro Manila, two in Region 4A, one in Region 5, two in Region 6, one in Cordillera, and another in Region 12 since December 16.

Abuniawan and Obrador are minors aged 17, and 13, respectively.

Mayor also said that in all 68 reported incidents, 40 were injured from firecrackers.

The PNP called on the public to immediately report cases of indiscriminate firing especially as the New Year celebration draws closer.

(If there is a group of people having a drinking session and you have a feeling that they might fire a gun, please report it immediately to the police so we can have it checked.)

He said the public may report cases of indiscriminate firing at the nearest police station in their area, or may  also text the information at 0917-847-5757.