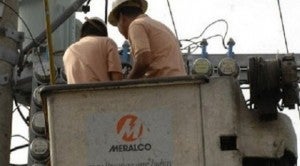 A party-list representative and leaders of militant groups on Friday filed in the Supreme Court a third case against the controversial P4.15 rate hike imposed by the Manila Electric Co. (Meralco) this month.

Aside from Mercalo, others named in the suit were the Energy Regulatory Commission (ERC), Department of Energy and the Office of the Executive Secretary.

“There is no basis for the rate adjustment. In fact, evidence shows that a collusion led to the increase in the power generation cost allegedly sustained by Meralco,” the petitioners said.

“The law is clear.  Before Meralco is entitled to a rate adjustment it must first show that it has incurred reasonable economic loss,” they said, adding that in the present case no such evidence was presented by Meralco, yet the ERC approved the rate increase.

The petitioners also accused the ERC of acting with grave abuse of discretion in approving the rate increase.  They want the court to nullify the so-called “Agra rule” or the automatic adjustment of the generation rate and system loss rate by distribution utilities.

They called the ERC’s decision of Dec. 9 approving the petition of Meralco to implement a generation charge of P7.67 per kilowatt-hour “a colossal injustice and abandonment of (ERC’s) mandate to protect the public, specifically electricity consumers, from manipulated power rate increases.”

The ERC, they said, “blatantly reneged on its duty to protect the public from anticompetitive practices and market abuse when it approved the P4.15 increase despite clear indications of irregularity in the simultaneous, planned and unplanned shutdowns, the hefty spike of electricity prices in the Wholesale Electricity Spot Market, and the unprecedented increase that Meralco is asking for,” the petition said.

They also said it was “really mind boggling” that the ERC approved Meralco’s request for a staggered increase, then at the same time ordered an investigation into the suspected collusion.

The protesting groups said this made them believe that “the ERC is also in collusion with vested oil interests in their profiteering activities.”

The petitioners also sought to declare as unconstitutional several provisions of Republic Act No. 9136, or the Electric Power Industry Act, among them, sections that empower the ERC to determine, fix and approve the universal charge to be imposed on all electricity end users and to fix system loss for recovery by the power distribution utility.