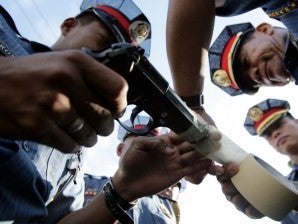 (If there is a group of people having a drinking session and you have a feeling that they might fire a gun, please report it immediately to the police so we can have it checked.)

He said the public may report cases of indiscriminate firing at the nearest police station in their area, or may also text the information at 0917-847-5757.

“You text that to the number and I will have the station commander responsible of the actions of our police men,” Purisima added.