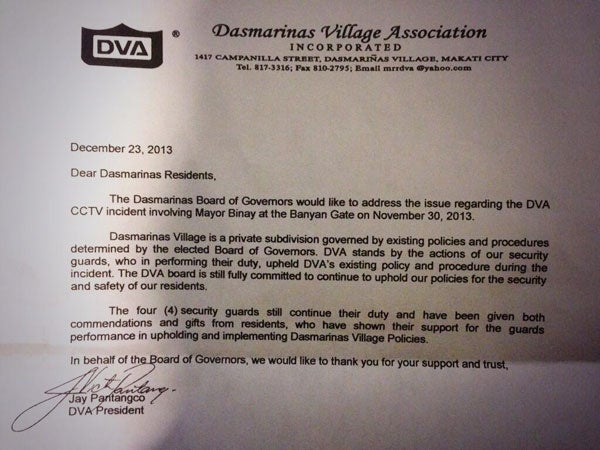 MANILA, Philippines – Residents of Dasmariñas Village commended and rewarded the four security guards who were allegedly arrested last month after prohibiting Makati Mayor Junjun Binay and his convoy from passing through a restricted gate.

The Dasmariñas Village Association (DVA), in a letter sent to residents Monday, said the four security guards “still continue their duty and have been given both commendations and gifts from residents, who have shown their support for the guards’ performance in upholding and implementing Dasmariñas Village Policies.”

The letter, signed by DVA President Jay Pantangco and posted online by a resident, said the village was governed by policies determined by their board of governors, which should be upheld for the security and safety of the residents.

“DVA stands by the actions of our security guards, who in performing their duty, upheld DVA’s existing policy and procedures during the incident,” the letter said.

The unnamed guards made headlines last week after the Philippine Daily Inquirer reported how they were allegedly arrested for barring the convoy of Binay from passing through Banyan gate around midnight, past the 10 p.m.  curfew for exiting vehicles. A CCTV footage of the incident was posted online by INQUIRER.net.

Earlier, village manager Mike Bucoy told INQUIRER.net that their guards did nothing wrong and that their rules applied to everybody.