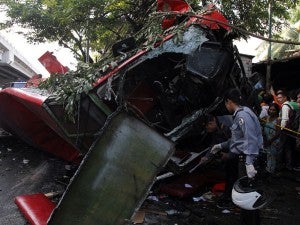 MANILA, Philippines – The driver of the ill-fated Don Mariano bus that plunged from the Skyway and killed at least 18 people died Monday night.

His cousin Efren Risomadero said Carmelo Calatcat passed away at the Intensive Care Unit (ICU) of the Paranaque City Doctors Hospital around 6:43 p.m. His remains will be brought to Bicutan.

Few days before, reports said that Catlatcat was able to move his hands but his health suddenly worsened and continued to deteriorate.

The hospital has yet to issue a statement regarding the cause of his death.

On December 16, the bus driven by Caltacat veered off the Skyway in Paranaque and crashed onto a van that left 18 people dead and 16 others injured.