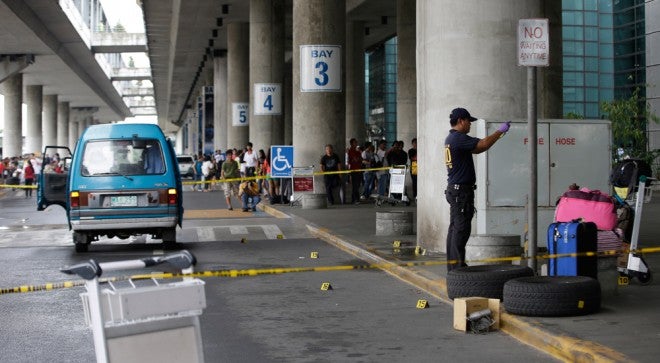 MANILA, Philippines—The mayor of Labangan town in Zamboanga del Sur, his wife and two others were killed in an ambush at the arrival area of the Ninoy Aquino International Airport Terminal 3 Friday morning.

Five others were injured in the incident that happened in the loading bay of the departure area. The victims were taken to the Air Force General Hospital at Villamor Air Base in Pasay City.

According to Honoradpo, Talumpa and his party landed from a Cebu Pacific flight 5J-852  around 9 a.m. and had just stepped outside the arrival area when the gunmen opened fire on them.  Some of the injured were bystanders.

In November 10, Talumpa, who was then a Zamboanga del Sur vice mayor, and his nephew Alimuddin Silad were wounded after gunmen also aboard a motorcycle shot them in Ermita.

Talumpa, a member of the political opposition, won a hotly contested electoral contest for mayor of Labangan in last May’s elections.

Terminal 3 manager Octavio Lina said that flights were not disrupted and that the terminal was not closed.  The shooting scene was cordoned off and was being processed by the police’s scene-of-the-crime operatives.

According to Laxa, there were no closed-circuit television units installed within the area where the incident occurred.

Honrado added that authorities have yet to identify the two gunmen.

But Laxa, the PNP ASG chief, said in a phone interview that the responding policemen who chased the assailants could help in identifying the suspects.

Laxa said they have gotten hold of several witnesses to the shooting.

Laxa said, the National Capital Region Police Office chief Police Director Carmelo Valmoria arrived at the NAIA terminal 3 to create a form a task force that will investigate the incident.

As of this posting, crime scene investigation was ongoing.

“The management of the airport will investigate the security procedures,” Honrado said. With a report from Jerome Aning, Philippine Daily Inquirer