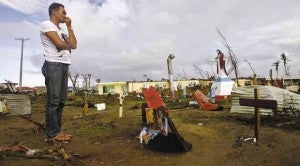 A MAN who survived Supertyphoon “Yolanda” visits the grave of a relative who died at the height of the storm in Palo, Leyte province, as storm survivors continue to struggle for their daily survival amid the toughest of conditions and threats to the flow of relief. RAFFY LERMA

TACLOBAN CITY, Philippines—Cupping his hands around the flickering candlelight and  shivering in an old white sando that was a size too large for his thin frame, eight-year-old Edcel Earl Balaes planted his slim white candle on the pavement along Real Street, one of this city’s main thoroughfares, as his contribution to the massive candle-lighting ceremony held here at dusk on Tuesday.

“This is for my pet rooster because he died when the tidal wave hit our house when Yolanda came,” he said. Despite the laughter that erupted around him after he said this, Edcel remained serious.

He said his pet deserved to be remembered like all those who died 40 days ago in this city and in many other areas in the country when supertyphoon Yolanda lashed through central Philippines on Nov. 8.

Erlinda Olivia P. Tiu, regional director of the Philippine Information Agency in Eastern Visayas (PIA 8), which spearheaded the event along with One Tacloban Civic Group and local television network Countryside Associated Television 8, said everyone who was devastated by the typhoon joined in the ceremony to mark the uniquely Filipino Catholic tradition known as “tapos” or “pacuarenta” (40th day) of the departed.

Survivors lighted a line of candles on a 10.1-kilometer road that stretched along this city’s main roads from Daniel Z. Romualdez Airport, passing through the downtown and up to the Anibong district, where many people had died when four ships docked on the port area were carried inland into residential areas by the storm surge, crushing houses and people along its path.

Colored candles, which were provided by the Department of Tourism, were placed on the roadside to form a continuous chain of light to connect the two end points in the two-hour candle lighting rite that started at 5:15 p.m. on Tuesday, the 40th day since the tragedy struck.

Tiu said the event sought to gather family and friends in Tacloban in a solemn rite as a final tribute to those ascending to the afterlife. She said the activity was the brainchild of local broadcaster Jeff Manibay who himself lost his parents to the calamity.

Manibay, in an interview, said his father, Felipe, and mother, Venecia, died at the height of the typhoon.

“When I lost my parents, I could not grieve properly,” he said.

He said that his parents were among eight persons in his barangay (village) who were never found even after days of search.

“In mass tragedies like this, grieving becomes communal, not personal. You get to feel other people’s grief with yours,” he said.

His grief still showing through his eyes, he said he did not expect the number of participants to triple from the expected 1,200 people.

Manibay said under normal circumstances, the 40th day of the dead in the Philippines would be celebrated with much merrymaking in homes.

“But, in our case, we cannot have the same emotions because we all lost our homes. So I thought, maybe we should do it on the streets then,” he said.

Lilia Dadula, 53, became a widow after her 57-year-old husband Conrado, a vendor, drowned as Yolanda washed away their house located in one of the coastal villages of Tacloban.

She sat on the pavement with fellow widows—daughter-in-law Charice de la Cruz-Dadula, 30, and Emma Cabiltes, 42, with their husbands’ pictures propped up in front of them beside lighted white candles.

The entire Barangay 88 consisting of 150 families now temporarily living in Tacloban People”s Center were there at the candle-lighting ceremony, mourning along with the widows as they commemorated their late husbands” 40th day.

Charice said the bodies of her husband Orlando, Lilia’s son, and Cabiltes’ husband Diego were among the last to be found on Dec. 3 under the debris.

Near the Tacloban Convention Center, which now serves as a temporary evacuation shelter to hundreds more of Taclobanons, Lenlen Resurecion Bausing lighted candles for her sister-in-law Gloria Bausing Cavite, 67.

Bausing scribbled a message that read “Gone but never forgotten” on top of Cavite’s picture.

She said Cavite has not been found after she was washed away by strong waves.  Bausing and her family, however, have accepted the high probability of her death.

Among those who joined the candle-lighting was government employee Romeo Badilla, who became misty-eyed when he spoke of his nephew Fredrick. Tuesday, the 40th day, would have been his nephew’’s 24th birthday and civil wedding to his fiance.

The cadavers of Fredrick and his fiance Joy Garil, who was six months pregnant, were found last December 6 under the debris in Anibong district. Badilla recalled how his nephew’s head fell off while a backhoe was retrieving the cadavers along the coastal area of Barangay 66. He said he still could not comprehend how a promising and caring young man could die so suddenly.

Badilla’s neighbor Gloria Hernandez, 49, said she was just pretending that her nephew Christopher Palle, 37, was vacationing somewhere far away with his wife and son who also died during the onslaught of Yolanda. Unlike Badilla who has accepted he could no longer get his nephew back, Hernandez was still in denial about her own relatives’ passing. Manibay said the activity sought to give closure to those who lost family members and friends.

Records of the Office of Civil Defense (OCD) in Eastern Visayas showed that as of Dec. 17, the total number of Yolanda’s fatalities now stood at 5,715

across all areas hit in Eastern Visayas (Leyte, Samar and Biliran islands).

“We are stronger than most people think. We also want to show the world that we will always remember zero eight November. That was the day hell

descended on earth upon us,” said Manibay.