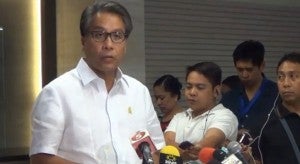 (SM’s CCTV system’s quality is good, and the faces of the perpetrators caught on camera are clearly seen.)

He said footage from SM’s security camera even captured the image of the suspects while they were buying hammer and the crow bar which they later used in shattering the glass display cabinets of F & C Jewelry and The Jeweller located inside the mall’s department store.

Authorities, he said, are getting still images of the faces seen in the footage, which they will compare with faces of suspects in the robbery at the SM Megamall early this year.

Police Superintendent Pedro Tesnado Sanchez, Quezon City Police District-Station 2 commander, said they are looking at seven men who are probably involved in this robbery incident that took place around 7:50 p.m.

The total amount of looted jewels is yet to be determined, he said.

Meanwhile, given the fact that the hammer and crow bar used in the robbery were bought inside the mall, Sindac said one proposal being looked into is the use of a claim stub which customers buying “critical” construction materials will present to claim their purchased item outside the mall.

Roxas: Around P5M worth of jewelry taken from SM North heist