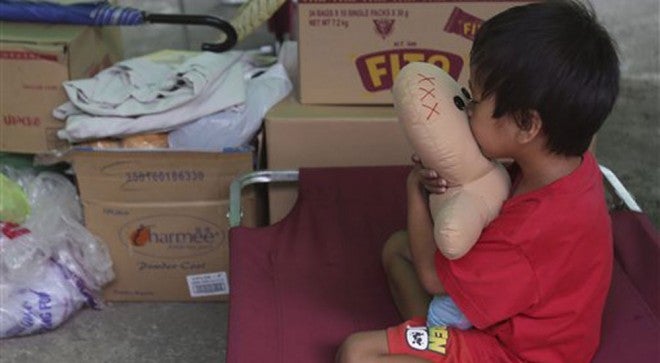 In this Friday, Nov. 22, 2013 photo, a typhoon survivor from Leyte province kisses a doll as he stays at tent shelters at the Villamor Elementary School in Pasay, south of Manila, Philippines. Thousands of people from areas wrecked by Haiyan clambered aboard free C-130 mercy flights to Manila without any plan, in a desperate bid to escape the hunger, uncertainties and lingering stench of death back home. Others arrived here by bus, or fled to central Cebu province, which like the capital is regarded by rural poor Filipinos as a greener pasture in this impoverished Southeast Asian nation of more than 96 million people. AP

The government’s official death toll from Supertyphoon “Yolanda” (international name: Haiyan) has breached 6,000 after 27 additional fatalities were reported yesterday on top of the nearly 1,800 people missing.

In its latest report, the National Disaster Risk Reduction and Management Council (NDRRMC) said there were 6,009 killed from Yolanda, the strongest typhoon to make landfall, which pummeled Eastern Visayas and other neighboring regions on Nov. 8.

Maj. Reynaldo Balido Jr., spokesperson for the NDRRMC, said at least 20 bodies were being found daily under debris in the hardest-hit city of Tacloban. Overnight, 27 deaths were added to the toll. 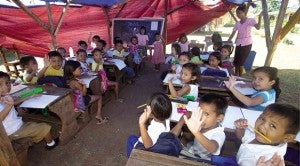 CLASSROOM WITHOUT WALLS Learning is more fun in Bantayan, these young students seem to say, as they hold classes in makeshift classrooms more than a month after Supertyphoon “Yolanda” flattened schools in northern Cebu province. EDWIN VICENCIO/CONTRIBUTOR

The homes of more than 16 million people were either flattened or damaged, and officials say rebuilding will take at least three years.

In Samar province, 224 were killed, 82 of whom were unidentified from Basey town.

In Eastern Samar, 265 were killed, 88 of whom were unidentified.

In Iloilo province, of the 135 killed, 23 were unidentified in Estancia and had been buried in a mass grave at the public cemetery.

In Capiz province, 86 were killed while 73 died in Cebu province, eight of whom had not been identified.

Why the mayor cried