Some journalists had it coming, probers say 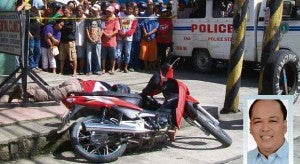 Radio journalist Rogelio Butalid lies dead outside the Radyo Natin station in Tagum City after being shot by a lone gunman on Wednesday. Butalid (inset) was also a village councilor. FRINSTON LIM/INQUIRER MINDANAO

Government investigators on Friday said the recent killings of journalists in Mindanao may have something to do with the way they practiced journalism.

The investigators, who agreed to talk to Inquirer on the condition they would not be named, gave one example: “(He) berated his targets like they were the worst animal on Earth and cocked his gun on the air, challenging his targets to a gunfight.”

The investigators did not name the broadcaster they referred to but those familiar with the airwaves in Mindanao said the style fits that of Joas Dignos, who was recently ambused in Valencia City, Bukidnon.

Others killed in the past two weeks include Michael Milo in Tandag City, Surigao del Sur, and Rogelio Butalid in Tagum City, Davao del Norte.

The investigators went on to say “journalists in Mindanao should re-examine the conduct of their colleagues who continuously violate their code of ethics.”

“These findings bother us because we want to put an end to this violence and we need the cooperation of everyone,” an investigator added.

The investigators, however, stopped short of recommending what kind of journalism they had in mind to stop the apparent impunity in the killing  of hard-hitting broadcasters.

Monsignor Elmer Abacahin, head of the media group in Cagayan de Oro City confirmed the findings of the investigators but added this was “not sufficient reason to kill the victims.”

“We are supporting the victims because they are our colleagues, but we do not subscribe to their methods of reporting,” Abacahin told Inquirer in a telephone interview.

Other findings in the investigation alleged the victims “had donors na kalaban ng tinitira nila (had donors that are the rivals of those they attacked on the air),” he explained.

He cited the case of Butalid, who was also a barangay councilman.  Butalid’s radio program was sponsored by the National Electrification Administration faction of the Davao del Norte Electric Cooperative, which is embroiled in a violent dispute with a procooperative faction.

Investigators have released an artist’s sketch of the suspect provided by witnesses.

Virgilio Mendez, National Bureau of Investigation deputy director for regional services, said the killer of Butalid had been identified and an operation is in place to arrest him.

Butalid was reportedly popular among listeners because of his hard-hitting exposés against corruption and illegal activities, and the way powerful people practice politics.