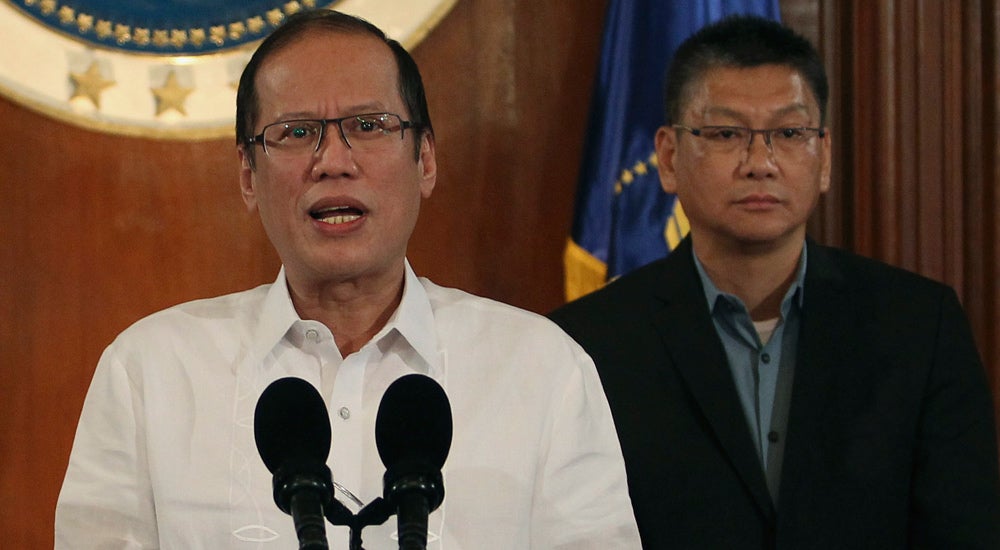 President Benigno Aquino III, left, speaks about Supertyphoon “Yolanda” during a nationally televised address at the Malacanang palace in Manila on Nov. 7, 2013, a day before Yolanda hit central Philippines. Aquino is not bothered that the official death toll from the supertyphoon is now twice the estimate he gave in an interview with CNN last week. Standing at right is Executive Secretary Paquito Ochoa Jr. AP PHOTO/MALACANANG PHOTO BUREAU, ROBERT VINAS

President Aquino is not bothered that the official death toll from Supertyphoon “Yolanda” is now twice the estimate he gave in an interview with CNN last week.

Aquino told the Inquirer on Monday that the 2,000-2,500 estimate of the death toll that he mentioned in an interview with CNN anchor Christiane Amanpour was based on the initial, confirmed report he received from the ground.

“The actual figure now is really way beyond the initial estimate I gave,” Aquino said.

But the government will not just yet give another estimate, even if the civil defense agency has begun to receive official reports from its regional offices.

“We want to give figures [that cannot be doubted], because we don’t want to increase the people’s anxiety, especially those with missing relatives,” Aquino said.

The official death toll stands at 5,209, which does not include 1,755 unidentified bodies recovered in Tacloban City, Leyte province, from Nov. 15 to 21.

But the official death toll is still rising, with more bodies being recovered as workers clear numerous communities flattened by the typhoon on Nov. 8.

In hardest-hit Tacloban alone, the death toll is now close to 2,000, with the body count reaching 1,932 on Monday.

Bube Arce, head of the body recovery task force, said more bodies were expected to be found as workers clear the city of rubble and storm debris.

The President’s handling of the response to the catastrophe has come under local and foreign scrutiny principally because of the slow provision of relief to the survivors and the lack of urgency in the retrieval of the bodies of the victims, which were allowed to litter and putrefy on the streets for days.

The government also appeared to be in denial that Yolanda (international name: “Haiyan”), the most powerful typhoon on record, claimed the lives of thousands of people.

With maximum winds of up to 250 kilometers per hour, Yolanda slammed into the Samar-Leyte typhoon alley, generating storm surges as high as 6 meters as it roared across the Visayan region, flattening entire communities and toppling power and communication lines on Nov. 8.

First responders reported seeing numerous bodies littering the streets and floating in the water, and local government and police officials feared the storm had killed up to 10,000 people.

The government was displeased with that estimate and sacked the regional police director in Eastern Visayas, Chief Supt. Elmer Soria, who had quoted the figure from a briefing by Leyte Gov. Dominic Petilla on Nov. 9.

The sacking of Soria and the clampdown on body-count reports by the National Disaster Risk Reduction and Management Council (NDRRMC) gave rise to the criticism that the government was playing down the death toll.

International agencies, however, said the death toll estimate of 10,000 appeared to be low, considering the massive destruction wrought by the typhoon.

The President acknowledged that the NDRRMC had been criticized for its low casualty count.

“It’s because you have to make sure that there is the certification or a coroner’s report before it is made official,” he said, referring to the body-count procedure.

Aquino said some local officials had reported to him casualty counts, both missing and dead, only for the figures to be amended later.

He said he had ordered an investigation of the high fatality count because of “a wide disparity in various areas.”

“What is it that contributed to [the high casualty count]?” the President said.

He acknowledged, however, that the topography and the storm surge were among the reasons why so many people perished.

“[But] looking at Guiuan (in Leyte), the casualty count was proportionate to the effects of the typhoon,” he said.

The real death toll may take long to establish even with help from foreign forensic experts in identifying the bodies.

In Tacloban, recovered bodies are deposited in the public cemeteries at Basper village, 8 kilometers from the provincial capital, and Suhi village, 13 km from the city.

Arce said the bodies were placed in body bags and laid in open pits in the two cemeteries. The bodies were sprayed with lime to contain the stench, he said.

But the pits were not covered, as more bodies were expected to be found, Arce said.

According to the Tacloban social welfare and development office, 546 people remained missing and their relatives were searching for them.

While the recovery group knew how many bodies had been found, it could not say how many were thrown into each pit in the two cemeteries.

Of the 1,932 bodies recovered as of Sunday, only 245 were identified by relatives.—With a report by Joey Gabieta, Inquirer Visayas