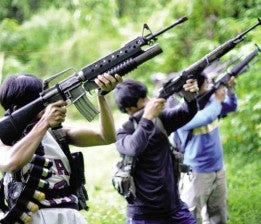 MANILA, Philippines—Heavily armed members of the New People’s Army gunned down Thursday a policeman in an attack on a municipal police station in Bukidnon, the military said.

According to Lieutenant Colonel Ramon Zagala, Armed Forces of the Philippines spokesperson, an undetermined number of insurgents dressed in military camouflage uniforms gunned down a police officer assigned with Kibawe Municipal Police Station around 5:15 a.m. Thursday.

After the attack, the guerrillas, boarding seven private vans, sped off towards Tomaras village in Kibawe and Damulog town.

“The NPAs continuously and deliberately conduct harassment and atrocities against government troops who are only doing their job to protect the people and secure a peaceful environment for them to live in,” said Zagala in a statement.

But the AFP said the situation in Kibawe is under control.

As augmentation to the police forces, troops from 403rd Infantry Brigade and 2nd Scout Ranger Battalion were already deployed to conduct blocking operations at Sampaguita and Natulungan villages in Kibawe town.

NPA rebels see imperialist motives in US assistance to Yolanda