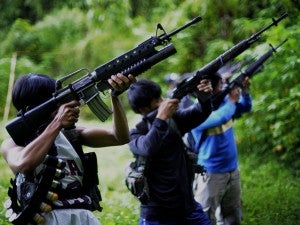 The Communist Party of the Philippines is sounding an alarum against the deployment of its perennial enemy, the United States, of soldiers and nuclear-powered warships to deliver food and other relief goods to the Visayas, which super typhoon Yolanda battered over a week ago.

In a statement, the CPP said the US was exploiting the Philippines’ vulnerability in the wake of the calamity to further its plan to increase its military presence here.

“The US government is engaged in disaster interventionism, exploiting the supine state of the Philippines after it was struck by super typhoon Yolanda, in order to justify its deployment of armed, nuclear-powered and interventionist military warships and armed troops in the Philippines,” it said.

“The CPP and the Filipino people denounce the Aquino government for shamelessly welcoming the US military troops with open arms,” it added

But Eastern Samar Rep. Ben Evardone, whose congressional district includes the heavily damaged Guiuan town, said this was not the time for politics.

“Given the magnitude of the problems, the relief distribution could have not improved substantially without our allies. Let us set aside political considerations in these trying times,” Evardone said when he was sought for comment Monday.

Evardone acknowledged that the American soldiers were among those who provided invaluable aid to the survivors.

“From what I personally saw in Eastern Samar, the efforts and support of the US military and the Australian Royal Air Force were a big help in the distribution of relief goods,” he said.

The US was among the many countries that sent food, medicines and personnel to the Philippines in the aftermath of the super typhoon, which killed hundreds and flattened entire communities. It also deployed warships and flew mercy flights to deliver relief goods to devastated provinces, some of which were rendered inaccessible by the heavy volume of debris blocking provincial roads.

The CPP, citing media reports, noted that the US had deployed six warships to the Philippines, including the nuclear-powered aircraft carrier USS George Washington that has 80 jet fighters, plus war helicopters and 5,000 soldiers. Joining the carrier are the cruisers USS Antietam, USS Cowpens, USS Mustin, USS Lasses and the USS Charles Drew.

The communist group also noted that US armed personnel and equipment were in Manila and other parts of the country, which to it indicate that US troops continue to be in the capital. It said there were reports that American soldiers had taken over the Tacloban airport, and that they were also using the tragedy to access the strategically located Mactan airport and seaport in Cebu.

It said the US has long been working to increase its presence in the Asia Pacific.

If the United States’ intention was solely to help, the CPP said, it could have coursed aid through civilian agencies involved in disaster relief.

“What the disaster victims need urgently are food, water and medical attention, not US warships bringing in emergency rations to justify their armed presence in Philippine sovereign waters,” it said.

“If the US government were really interested in providing assistance to countries who have suffered from calamities, then it should increase its funds to civilian agencies that deal in disaster response and emergency relief, not in fattening its international military forces and taking advantage of the people’s miseries to justify their presence,” it said

It warned that the US has a history of “militarizing” disaster response, saying it had done the same when a massive earthquake struck Haiti three years ago.

“The high-handed presence of US armed troops in Haiti has been widely renounced. The US government has since maintained its presence in Haiti,” it said.

It said that international support for the Philippines was welcome, but the Filipino people would work to keep the country’s sovereignty.

“However, though devastated, the Filipino people have preserved their sense of national dignity and will continue to defend their sovereignty against foreign military interventionism,” it said.