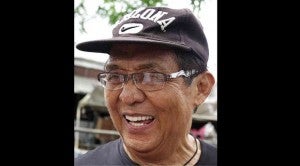 MANILA, Philippines — Justice Secretary Leila de Lima said on Wednesday that the Board of Pardons and Parole approved the parole of Antonio Leviste on the basis of his acquittal in the court case filed against him for stepping out of the New Bilibid Prison in 2011.

De Lima said this was the contentious issue that she would point out in her new memorandum to President Aquino.  This memorandum would indicate her own position on the grant of parole to Leviste, but she declined to disclose whether she would push for the recall of Leviste’s parole.

Escaping confinement or evading the service of sentence is one of the grounds for disqualifying an inmate for parole.

Leviste was earlier charged for evading the service of his sentence for homicide after he was caught outside of the National Bilibid Prison in 2011, but he was later acquitted by the Makati regional trial court.

De Lima said the BPP took Leviste’s acquittal to mean that there was no longer any ground for disqualifying Leviste from parole.

“To me that’s an open question, to me that’s a contentious issue because I think there is nothing in the BPP manual that says a conviction was necessary. I think the BPP may have glossed over the findings of the DOJ fact-finding committee before, that there were explicit findings that Mr. Leviste went out without appropriate authority,” she told reporters at the House of Representatives.

The President can revoke a grant of parole to a convict, according to De Lima.

She also acknowledged on Wednesday that she was given a “heads up” with regard to the parole given to Leviste and several other inmates, even if her recommending approval was not necessary.

She said she had asked questions to ensure this passed through the proper processes.

She also said it was only later, during her review, that she found that there appeared to be an issue with regard to the BPP’s consideration of whether Leviste was qualified for parole in light of his acquittal for evasion of service of sentence.

De Lima also said on Wednesday that Leviste would not be able to leave the country easily since there was a parole officer monitoring his movements and activities.

He would also have to report to his Parole and Probation Administration regularly.