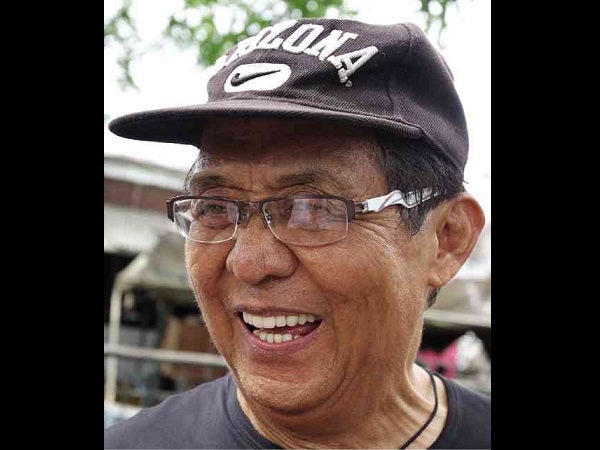 An anticrime group on Friday denounced the release from prison of homicide convict Antonio Leviste and vowed to question the grant of parole to the former governor of Batangas province.

Leviste walked out of New Bilibid Prison in Muntinlupa City at noon, a free man again after serving less than half of his 12-year sentence for killing his longtime aide, Rafael de las Alas, in 2007.

Accompanied by members of his family, Leviste, 73, received his release papers at 11:20 a.m., more than two weeks after the Parole and Probation Administration (PPA) granted his application for parole and those of 34 other prisoners.

After about 40 minutes, Leviste and his relatives left the prison compound. They were bound for Lipa City in Batangas.

She said Leviste had complied with all the legal requirements for parole.

“I was also told that the family of the victim did not object and [said they had] forgiven Mr. Leviste,” De Lima said in a text message to reporters.

But Dante Jimenez, founding chair of the Volunteers Against Crime and Corruption (VACC), condemned the grant of parole to Leviste, who, he said, “was given VIP treatment” in New Bilibid Prison and at one time was caught outside the national penitentiary.

“We are outraged and we condemn this parole,” Jimenez said.

He said the PPA should inform the public about public hearings involving high-profile convicts like Leviste.

“If you recall, the criminal case filed against Mr. Leviste was ‘People of the Philippines vs Leviste,’” Jimenez said. “His crime is against the State so even if he had been forgiven by the family of his victim, the people have the right to be informed and express their objection [to the grant of parole to him].”

Jimenez said the VACC would ask the Department of Justice for documents from the PPA to determine the basis of the parole granted to Leviste.

On Jan. 12, 2007, Leviste admitted that he shot and killed De las Alas during an argument in his office in Legaspi Village, Makati City.

He was convicted of homicide in 2009 and sentenced to a minimum of six years’ to a maximum of 12 years’ imprisonment in the national penitentiary.

But with his “good conduct time allowance” and detention in the Makati City Jail during his trial, Leviste had served his minimum sentence, Tesoro said.

“His age may have been considered. He is already 73 years old,” Tesoro said.

“If he had [derogatory records] with the board of discipline here, his [application for] parole would have been denied. But there were no derogatory records so we processed his release papers,” Tesoro said.

It seems Leviste’s “excursions” out of prison were not considered a violation of his sentence.

In 2011, a television network discovered and exposed the special accommodations prison officials were extending to Leviste.

On May 19, 2011, National Bureau of Investigation agents found Leviste in his Makati office. They arrested him and took him back to the prison.

The discovery created a scandal at the Bureau of Corrections, leading to the resignation of the agency’s head, Ernesto Diokno, and the firing of five New Bilibid Prison officials by the justice department.

The corrections bureau brought charges against Leviste, accusing him of evasion of sentence, but Tesoro said the Makati court that heard the case dropped the charges.

“Leviste’s argument was that he was given permission by the [corrections bureau] to see his doctor,” Tesoro said.

The VACC’s Jimenez said his group would question the court’s decision to drop the charges against Leviste and might also move for the investigation of the judge.

Had Leviste been convicted, he would have been meted out a sentence of two to six years’ imprisonment in addition to his original sentence, Jimenez said.

Now he is free again, though not totally free.

Tesoro said Leviste had to report regularly to a parole officer and maintain his good behavior.

He added that Leviste would be under parole supervision “until he serves his maximum sentence of 12 years.”

His parole papers, released by the PPA, state that, among other things, he should live in just one place and that he cannot engage in illegal activities or own a firearm.

He also cannot socialize with criminals.