Attacks on Shiites kill 18 in Iraq 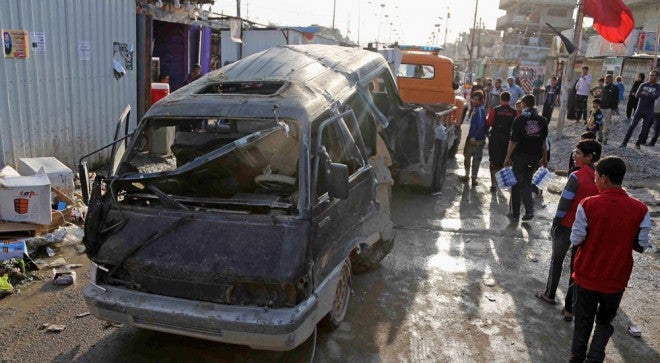 A damaged bus is towed away from the site of a car bomb attack in Sadr City neighborhood in Baghdad, Iraq, Sunday, Dec. 8, 2013. A suicide bomber attacked a Shiite shrine in Iraq Tuesday, killing 11 people, in addition to some mourning seven who were shot dead earlier in the day, police and a doctor said. AP

BAQUBA, Iraq—A suicide bomber attacked a Shiite shrine in Iraq Tuesday, killing 11 people, including some people mourning seven shepherds who were shot dead earlier in the day, police and a doctor said.

The blast at the Abu Idris shrine in Baquba, northeast of Baghdad in the religiously and ethnically mixed province of Diyala, also wounded 19 people, the sources said.

The victims of the bombing included people who were mourning the deaths of seven Shiite shepherds who were gunned down northeast of Baquba earlier on Tuesday.

Members of Iraq’s Shiite majority are frequently targeted by Sunni militants, who consider them to be apostates.

In Baghdad, a roadside bomb exploded near a market on Tuesday, killing one person and wounding five, while gunmen shot dead a police officer and wounded two more near Ramadi, a city west of the capital.

Violence has reached a level this year not seen since 2008, when Iraq was just emerging from a period of brutal sectarian killings, and the surge in violence has raised fears the country is falling back into all-out conflict.

It took just eight days for this month’s death toll to surpass that for the entire month of December last year, according to AFP figures based on security and medical sources.

Officials have blamed the violence on Al-Qaeda-linked militants emboldened by the civil war in neighboring Syria, but analysts and diplomats also say the government has not done enough to address underlying domestic grievances fuelling the violence.

Members of the country’s Sunni minority, who complain of discrimination at the hands of the Shiite-led government, have held demonstrations for almost a year.

The government has made some concessions aimed at placating Sunni Arabs, including freeing prisoners and raising the salaries of anti-Al-Qaeda fighters. It has also trumpeted security operations against militants.

But the daily attacks have shown no sign of abating, and violence has killed more than 6,350 people since the beginning of the year, according to AFP figures.