Leviste parole aboveboard but Aquino can revoke it – De Lima 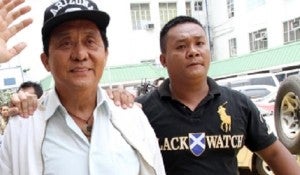 MANILA, Philippines—The parole granted to former Batangas governor Antonio Leviste is “aboveboard,” but Justice Secretary Leila De Lima said President Benigno Aquino III has the power to reverse or revoke it if he is not satisfied with the explanation of the Board of Pardons and Parole.

“I see no basis for me to conclude that the Board did not act above board in passing upon that such application for parole…But of course we will always defer to the decision of the President,” Justice Secretary Leila De Lima told reporters Monday.

De Lima met with heads of the Board of Pardons and Parole and Bureau of Corrections to determine their basis in granting parole for Leviste.

Leviste was released Friday after the BPP approved his application for parole.

The BPP said Leviste has met all the requirements to be qualified for parole.

“The Board [BPP] is standing by their decision. Their claim is that former Governor Leviste has met all the requirements for parole and according to them, he suffers from no disqualification,” De Lima said.

While Leviste was caught sneaking in and out of prison in 2011, he was acquitted by the court on charges of evasion of service of sentence.

“The Board told me that he was already penalized for that infraction. It would appear that the Board of Discipline adjudged him liable for grave misconduct and as a penalty, they withheld all his privileges and deduction from his good conduct time allowance,” De Lima said as she noted that the explanations by the BPP and BuCor would be included in a memo which we will submit to the President.

She said President Aquino has the power to withdraw the parole granted to Leviste if he is not satisfied with the explanation.