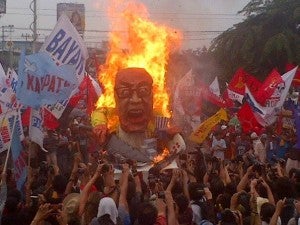 MANILA, Philippines—Various militant groups are working hand in hand to finish an effigy that would be burned to mark the International Human Rights Day and air their dismay over the supposed “destruction caused by the Aquino administration’s policies, especially on human rights.”

Named as “P-Noy the Destroyer,” the 10.5 feet tall effigy made from wood, bamboo and paper mache will be torched as various groups, led by Karapatan, hold a multisectoral protest march in Mendiola before noon Tuesday.

In an advisory, Karapatan said they will protest against the killing of farmers and indigenous people, defense of the pork barrel, disastrous disaster response of the government, large scale mining and environmental destruction, and the demolition of urban poor communities.

“All these wreak havoc on people’s lives and rights,” the group said.

A similar protest is expected to be held in Calamba City later in the day.

At 4 p.m., the Southern Tagalog delegation will travel to Quezon City for an ecumenical Mass around 8 p.m. at the Sto. Domingo Church.

In a separate advisory, Karapatan said a wrecking ball effigy depicting President Benigno Aquino III as “wrecking king” will be unveiled as they go on a vigil in preparation for bigger mass actions on Tuesday.

In its website, the United Nations (www.un.org) said the Human Rights Day was proclaimed in December 10, 1950 by the UN General Assembly to bring to the attention ‘of the peoples of the world’ the Universal Declaration of Human Rights as the common standard of achievement for all peoples and all nations.