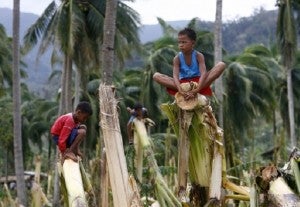 DAVAO CITY, Philippines – Environment and small farmers’ groups are rooting for the bill that would effectively ban aerial spraying not only here but also in the entire country once passed in Congress.

Dagohoy Magaway, president of the farmers’ group Mamamayan Ayaw sa Aerial Spraying (MAAS), said small farmers have expressed support for House Bill 481, or an “act banning aerial spray of pesticides and other hazardous substances and for other purposes” filed by Akbayan Reps. Walden Bello and Kaka Bag-ao recently in Congress.

He said they have decided to support the bill while waiting for the Supreme Court ruling on the aerial spray ban ordinance in the city, which has been contested by big banana growers’ and exporters’ group, for its projected adverse impact on the banana industry, Mindanao’s biggest export earner.

The proposed bill cited the Department of Health (DOH) study showing the negative effects of pesticides on the health of people in communities near banana plantations. The DOH and the Commission on Human Rights earlier recommended a ban on aerial spraying for violating the people’s right to a healthy life and environment.  The bill adopts the ban recommended by the DOH and CHR and prescribes a heavy penalty for pilots and aircraft owners who would continue to do aerial spray once the bill is approved.

“It’s about time that we really look into agricultural practices that may affect the health of the people,” said Davao City Councilor Leonardo Avila III, who supported the aerial spray ban ordinance the city council passed in 2007.

Avila said the Davao City Council was merely exercising the police power of the local government when it declared the aerial spray practice as a “nuisance,” since the pesticide drift could reach areas not targeted by the aerial spray.

An Akbayan partylist representative recently filed House Bill 481, after earlier similar bills, including HB 3381 filed by the Bayan Muna Partylist in Congress, did not prosper.

“Now, we are hopeful because other groups, including those of Gabriela Women’s Rep. Luz Ilagan are also supporting the bill,” said Mary Ann Fuertes, executive director of the Interface for Development Intervention (Idis).

A study released by Idis in April this year found traces of pesticides in the air and water samples taken from three random sites in the Talomo-Lipadas and Panigan-Tamugan watershed areas, the current and future sources of drinking water in Davao city, a fact partly blamed on the spray drifts and the common practice by plantations of using pesticides.