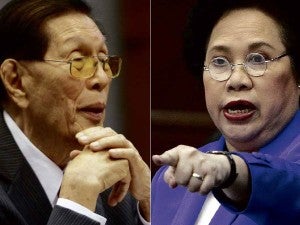 PAYBACK TIME Using the words of a “Hunger Games” character, Sen. Miriam Defensor-Santiago called Enrile “sick, sick, sick,” among other things, and reiterated her claim that he was the mastermind of the P10-billion pork barrel scam. RAFFY LERMA

MANILA, Philippines—Other members of the Senate are studying the speeches of senators Juan Ponce Enrile and Miriam Defensor Santiago in a bid to strike out “unparliamentary words” and personal attacks from the chamber’s records.

In an interview on Inquirer Radio 990AM, Senator Vicente “Tito” Sotto III acknowledged that any member of the Senate is free to say anything outside the office and in public, but stressed that there are still rules to follow when inside the plenary hall.

Sotto did not elaborate on the particular words they wanted to purge out of the Senate journal, but said that words such as “asshole” should not be used.

“You can craft it [speech] in such a way [that] you can deliver the message you want to say without using unplarliamentary words,” Sotto said.

Enrile and Defensor took turns in delivering their privilege speeches—which, basically, contain replies to rather personal attacks from each other.

In his speech, Enrile did not name Santiago as his “obsessive hater” and the “Peeping Tom ” inside this Senate, but Defensor decided to deliver a privilege speech exactly a week later. In her speech, Santiago called Enrile names, from “sex addict,” “tanda,” to “poster boy stem cell treatment.”

Both parties also answered specific allegations being thrown by each other.

Sotto said he is not taking anything on a personal level, but said that he is just after the image of the Senate.

“The scholars of the future will be looking at the records and journals of the Senate and will see these words. That’s the problem,” Sotto said.

This kind of word war between senators is, however, not new to the Senate.

During the 9th Congress, Sonny Alvarez and Orly Mercado were not in good terms, Sotto said.

“Pero one thing about these two personalities is their tongues were very sharp, but I seldom hear, or I do not recall them using unparliamentary words,” Sotto said.