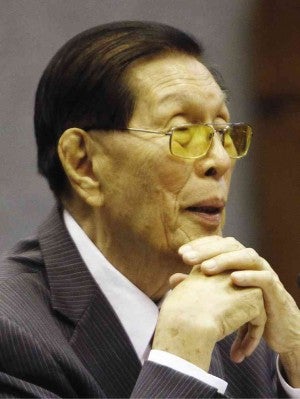 The exchange of harsh words and charges between Senators Miriam Defensor-Santiago and Juan Ponce Enrile resumed on the Senate floor on Wednesday, with the woman legislator questioning the integrity and morality of the minority leader.

In a privilege speech, Santiago accused Enrile of committing seven sins, including his supposed role in the deaths and disappearances of political dissenters during martial law decades ago and a propensity to chase women. She asked Justice Secretary Leila de Lima to investigate the charges.

“Guided by faith in a just God and in the rule of law, dozens of whistle-blowers have testified in writing and provided supporting documents to prove that the very heart of darkness is the leadership of the Senate itself,” she said while staring and repeatedly stabbing a finger at Enrile, who was seated just a few feet away.

She also accused the former Senate President of giving safe haven to then Sen. Panfilo Lacson in his home province in Cagayan when the latter was evading a warrant for his arrest amid reports that he slipped out of the country during the Arroyo administration.

Enrile delivered a privilege speech last week to deny repeated allegations that he was the “brains” behind the pork barrel scam, that he wanted implicated businesswoman Janet Lim-Napoles dead and that he financed Moro National Liberation Front rebels in their attempt to lay siege on Zamboanga City in September.

He went on to cast doubts on Santiago’s competence by disclosing her low marks in the bar examinations, on her integrity by having the Senate rent her satellite office at her office building and on her mental health by recalling the time when she admitted to consulting a psychiatrist once.

Enrile, Sen. Jinggoy Estrada and Sen. Ramon Revilla Jr., members of their staff and several other lawmakers and government officials are facing plunder charges in the Ombudsman in connection with the pork barrel scam allegedly hatched by Napoles.

“Instead of presenting evidence to the public of his hypocritical protestations of innocence, Enrile once again chose to steer public attention to what he hopes will be a diversion: The lies and black propaganda hurled against me during the 1992 presidential campaign,” Santiago said.

“This man, contrary to logic and common sense, hopes to evade criminal prosecution and public outrage over his plunder, by resurrecting campaign dirt against me which are over 21 years old! Dream on, old man, aka Tanda!” she added, looking at the 89-year-old senator that she also called Mr. Dementia.

In a manifestation after the speech, Enrile said Santiago “only confirmed everything that I said in my privilege speech regarding her mental health, her propensity to make unfounded, baseless accusations, regarding her use of ad hominems, personal attacks, personal assaults against innocent people without any proof or iota of evidence to back her up.”

“And sad to say, she presented herself as my best evidence to prove the points that I said in my previous privilege speech,” he added.

Santiago had one of the podiums placed in front and center of the session hall so that she could face Enrile and her colleagues instead of Senate President Franklin Drilon as she spoke.

At times, Enrile would smile and nod as Santiago delivered her scathing remarks. He was also tinkering with his tablet, something that Santiago had previously criticized as Enrile’s lack of focus on the workings of the chamber he used to lead.

“Notably, the Ombudsman has admitted receiving a memorandum of over 200 pages pinpointing Enrile as the mastermind of plunder. That official memorandum validates the charge I aired in the latest hearing of the blue ribbon committee, where I first made that very same accusation, based on the lawyer’s thought process of enlightened skepticism,” Santiago said.

“If he smarted against the accusation, Enrile could have requested for an additional hearing where he could be personally present and interpellate Janet Napoles, who appears to be his BFF, or best friend forever. But he chooses to stay away and keep silent, because he is immobilized by fear and humiliation,” she added.

Some 200 students from 16 schools, including the University of the Philippines College of Law and San Beda College, went to the Senate to watch and listen to Santiago. The senator’s husband, former Interior Undersecretary Narciso Santiago Jr., and a cousin, former Quezon City Rep. Matias Defensor, were also in the gallery.

On a medical leave for chronic fatigue, Santiago didn’t allow Enrile or any of her colleagues to interpellate her after her speech. She, however, briefly addressed the students in one of the Senate’s hearing rooms and had pictures taken with them before leaving the premises.

Enrile said he thought Santiago was going to answer his allegations against her “point by point.” 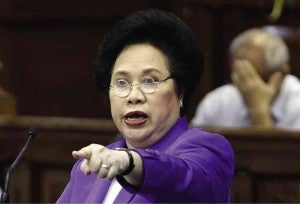 PAYBACK TIME Using the words of a “Hunger Games” character, Sen. Miriam Defensor-Santiago called Enrile “sick, sick, sick,” among other things, and reiterated her claim that he was the mastermind of the P10-billion pork barrel scam. RAFFY LERMA

with a neuropsychiatrist and this was when I interrogated her intensely when she submitted herself for investigation during her confirmation hearing in 1989,” he said.

“She was present in those meetings and it was shown that indeed something was wrong,” he added.

Santiago, nonetheless, challenged Enrile, a fellow alumnus of the UP law school, to a debate.

“As I did in the past, I challenge Enrile to a public televised debate on the plunder charge against him, including his illegal and immoral use of the Senate President’s discretionary fund to distribute nearly P2 million as Christmas bonus last year to each senator, except for four senators, whom he considers his political enemies, led by me,” she said.

“It should be held at the UP Malcolm Theater and only students with valid IDs should be allowed to prevent Enrile from renting a partisan crowd,” she added.

The session was suspended for several minutes after Santiago’s speech. When it resumed, Enrile rose to make the manifestation.

Read Next
Aquino no-show for ‘Pablo’ victims
EDITORS' PICK
Acer starts the year off strong with the Aspire Vero National Geographic Edition
The best of bayside and city living at SMDC’s Sail Residences
EDITORIAL: Protecting the polls’ integrity
COVID-19 virus spread slowing down in Metro Manila, says OCTA Research
Over 3 Million worth of prizes to be won at Smart Padala’s SENDali Manalo Promo!
Comelec junks petition to scrap Bongbong Marcos COC
MOST READ
Drug lord Espinosa tried to escape through air vent at detention facility – NBI
In Batanes, octogenarian dies of COVID-19
When to get boosters after positive COVID test
Marcos Jr. visits Cebu, stands as ‘ninong’ to mayor’s son
Don't miss out on the latest news and information.