7 ex-solons got up to 78% in kickbacks, says NBI | Inquirer News 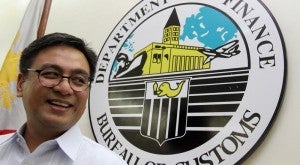 The National Bureau of Investigation has accused seven former lawmakers, including resigned Bureau of Customs Commissioner Rozzano Rufino Biazon (shown in photo), of pocketing as much as 78 percent in kickbacks from their pork barrel funds transferred to fake foundations allegedly owned by detained businesswoman Janet Lim-Napoles. INQUIRER FILE PHOTO

The National Bureau of Investigation has accused seven former lawmakers, including resigned Bureau of Customs Commissioner Rozzano Rufino Biazon, of pocketing as much as 78 percent in kickbacks from their pork barrel funds transferred to fake foundations allegedly owned by detained businesswoman Janet Lim-Napoles.

According to case documents filed by NBI officer in charge Medardo de Lemos in the Office of the Ombudsman, whistle-blower Benhur Luy testified that Biazon or his authorized representative, Energy Regulatory Commission chair and former Pampanga Rep. Zenaida Cruz-Ducut,  received P1.95 million in cash as a commission, or 72 percent of P2.7 million from his share of the Priority Development Assistance Fund (PDAF) that he channeled into a Napoles-controlled foundation, the Philippine Social Development Foundation Inc. (PSDFI), through the Technology Resource Center (TRC) in 2007.

The NBI said Biazon did not reply to the Commission on Audit (COA) query in 2011 seeking confirmation of his signature on PSDFI’s project proposal to the TRC.

Biazon resigned as head of the Bureau of Customs on Monday after the NBI filed charges against him and six other former congressmen last Friday.

Biazon said he did not know Napoles and vowed to clear his name.

Napoles, the alleged brains behind the P10-billion pork barrel scam, is detained at a police camp in Laguna province, facing serious illegal detention charges brought against her by Luy.

The NBI said Biazon could face more charges of malversation and misuse of government funds.

“The records of the COA also disclosed that there were other NGOs (nongovernment organizations) involved in connection with the implementation of the PDAF [projects] of Representative Biazon [that] are not Napoles NGOs. Further verification is still [ongoing],” the NBI said in its letter seeking preliminary investigation of the second batch of former lawmakers to be charged in the P10-billion pork barrel scam.

In his testimony, Luy said then Ilocos Sur Rep. Salacnib Baterina and his agent Ducut received P7.5 million in rebates, or 78 percent of the P9.6-million pork he gave to PSDFI in 2007.

The NBI is also looking at another beneficiary of funds from Baterina’s PDAF allocation, Kaagapay Magpakailan Foundation, which was not a Napoles NGO but could become  part of a separate case.

Luy claimed that former Davao del Sur Rep. Marc Douglas Cagas IV and his agent Ducut walked off with P5.54 million in commissions, or 73.4 percent of the P7.55-million pork he gave to People’s Organization for Progress and Development Foundation Inc. (P2.7 million through the TRC) and Social Development Program for Farmers Foundation Inc. or SDPFFI (P4.85 million through National Agribusiness Corp. or Nabcor).

Cagas confirmed his signatures in the documents held by the COA on his PDAF releases to the Napoles NGOs and other rival foundations.

His father, Davao del Sur Rep. Douglas Cagas, and his agent got P9.3 million in commissions, or 60.54 percent of the P15.36 million in pork he gave to PSDFI and Countrywide Agri and Rural Economic and Development Foundation Inc. (CARED) in 2007.

The elder Cagas denied that he signed the documents provided by the COA except for the letter of agreement and endorsement for PSDFI.

“According to the COA, these transactions are questionable. The funds transferred to these NGOs had unliquidated balances in full as of audit date,” the NBI said.

Olano confirmed writing an endorsement letter to then TRC Director General Antonio Ortiz (who was also charged in the case) but denied signing the other documents.

Then Oriental Mindoro Rep. Rodolfo Valencia and his agent, Celia Cuasay, received P2.4 million in commissions, or 36.86 percent of the P6.51 million in pork he channeled into Masaganang Ani para sa Magsasaka Foundation Inc. (MAMFI) in 2007.

Valencia denied in February 2012 that he signed the papers endorsing MAMFI after confirming these as “authentic, true and correct” to COA probers in August 2011.

Luy also said that South Cotabato Rep. Arthur Pingoy Jr. and his agent, Ducut, received in cash or through bank transfers P7.055 million in kickbacks, or 33.7 percent of the P20.91 million in pork he gave to PSDFI (P18 million through TRC) and SDPFFI (P2.91 million through Nabcor) in 2007 and 2008.

The NBI said Pingoy did not reply to queries from the COA, which noted that the former lawmaker “is unknown at his given address.”

In the charge sheet, the NBI accused the lawmakers of conniving with Napoles and the NGO officers to influence heads of implementing agencies to enter into agreements with the Napoles NGOs without any competitive bidding.