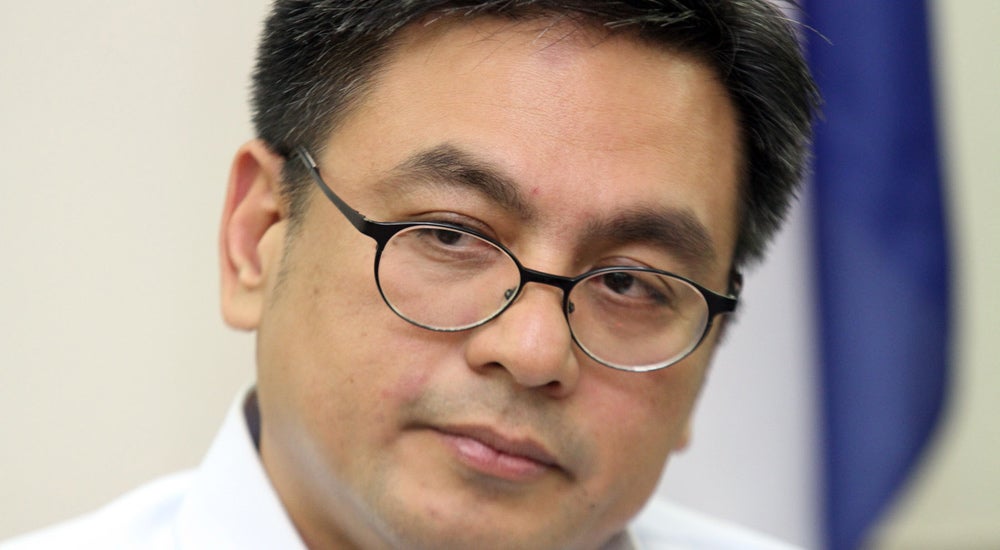 President Aquino on Monday accepted the resignation of Customs Commissioner Ruffy Biazon and gave him “until the end of the week” to vacate the post amid allegations that he was involved in the P10-billion pork barrel scam.

Last week, the National Bureau of Investigation charged Biazon, a former Muntinlupa congressman, and 33 others with malversation, direct bribery, graft and corrupt practices in the Office of the Ombudsman for allegedly channeling pork barrel to dubious NGOs put up by Janet Lim-Napoles, the alleged mastermind of the scam.

Biazon’s resignation came after his meeting with the President in Malacañang.

“I have given Commissioner Biazon until the end of the week to wind up his affairs in the Bureau of Customs (BOC) in order to ensure an orderly transfer,” Aquino said in a statement released in the middle of Biazon’s press conference announcing his “irrevocable resignation.”

Biazon said he gave up the position to “protect my family,” spare the President of undue criticism and give way to a new leadership facing no questions of credibility.

He said he had to do “what is fit to the standard of what a Biazon is—one who is dedicated to honor as he is to duty. One who is brave in the face of adversity as he is courageous to assume accountability.”

“It is a decision that I am at peace with,” he said in a statement.

Biazon, a member of Aquino’s Liberal Party, later told the Inquirer he felt “relieved” after quitting his post.

“I thank him for his years of service to our administration and the nation. I wish him nothing but the best as he returns to private life,” Aquino said.

Citing Biazon’s resignation and their subsequent conversation, the President said the customs chief “explained that it would be best to provide the secretary of finance the widest leverage and flexibility to steer the future direction of the Bureau of Customs, in light of the controversy brought about by [his] inclusion in the complaint of the National Bureau of Investigation before the Ombudsman.”

Proper thing to do

The President said Biazon believed that the proper thing to do was to defend himself without compromising his past record, or the ongoing reforms in the bureau.

“He is especially concerned with protecting his family, in particular his children, from the effects of a public controversy,” Aquino said.

His father, Muntinlupa Rep. Rodolfo Biazon, a former senator who served as Armed Forces of the Philippines chief of staff in the first Aquino administration, said he was happy for his son, in a way, now that he had resigned.

“In one way, I am happy for the former commissioner because he had been relieved of the pressure of the job. The pressure started bearing on him on Day 1, when he assumed, and there were entities that would like to have the job,” the elder Biazon told reporters.

Still, feelings were mixed because the family was also sad that the younger Biazon’s name was affected.

The elder Biazon, who as the Marines commander helped repel a coup attempt against the President’s mother, Corazon Aquino, said he had asked his son to refuse the job when it was first offered to him.

From Day 1, “entities” that wanted his position were working to get the job of his son, he said.

The younger Biazon, who assumed the top BOC post in September 2011, said he had to resign “to prevent the exploitation of the controversy (his being linked to the multibillion-peso pork barrel scam) by parties who would like nothing better than to have an issue to throw against the Aquino administration.”

“Being a presidential appointee to a sensitive post, critics will surely have a field day taking potshots at the President if I stay in the post. I would rather see the reforms of his administration succeed than retain my opportunity to serve,” he said.

Biazon also stressed the need to “protect my family, particularly my young children, from the exposure to the hostile environment of a public controversy involving their father.”

“The intense discussion in the media may be too much for them to endure. They are too young to understand that in the face of allegations like these, anyone is deemed innocent until proven guilty in a court of law,” he said.

Biazon also resigned to “relieve myself of the stress and pressure that have been brought upon me by those who have been affected by the reforms I have initiated, those whose interests I have blocked and disrupted, those who would like to uphold the status quo of the kalakaran (way of doing things) in the Bureau of Customs.”

“Indeed, reform has its enemies. And in the case of customs reforms, well-funded enemies. In the past two years, I have so far survived the attacks and obstacles thrown at me. But I can only take so much,” he lamented.

In a hastily arranged news conference at the BOC headquarters in Port Area, Manila, Biazon said he disclosed that as early as Friday, he had prepared his resignation letter.

When he called on the President on Monday, “the first thing on my mind was to file my resignation,” he said. “That set the tone of our conversation.”

He said Aquino “gave his comments. I mentioned to him the circumstances regarding my decision to quit my post.”

Asked about Aquino’s response to his quit offer, he said, “We’re OK.”

On talk that he had been made a “sacrificial lamb” to insulate the Palace from the pork barrel controversy, Biazon said, “There’s no political color involved here.”

“But if there are some questions regarding the evaluation of PDAF (Priority Development Assistance Fund) cases, then so be it,” he noted.

The NBI said that Biazon, a congressman from 2001 to 2010, allegedly used one of Napoles’ NGOs—Philippine Social Development Foundation Inc.—as a conduit in the implementation of livelihood projects chargeable to his PDAF, a pork barrel, worth P2.7 million in 2007.

Biazon or his agent collected commissions totaling P1.95 million in 2007, according to whistle-blower Benhur Luy, a relative and former employee of Napoles.

Biazon said he had nothing against the Aquino administration for allowing him to be linked to the pork barrel scam.

“The administration is led by a President who inspired me to serve in my capacity,” he said.

But Biazon said he would “not be surprised if some of my detractors are behind the filing of the case involving me.”

“To clear my name… That’s the first task of the day,” he said.

His father noted that information reaching him “from different directions” was that his son was not going to be included in the list of former lawmakers who were going to face criminal complaints for the alleged misuse of their pork barrel.

“Something happened the night before the announcement of the filing of the charges. Maybe a check with the circumstances that led to the inclusion that night is something,” the elder Biazon said.

But he added that he had faith in his son and in the institutional judicial process to resolve this matter. Ruffy is certain he could clear his name, he added.

The elder Biazon also believed his son could still make a political comeback.

The younger Biazon said he was “still gathering information about my last-minute inclusion in the case.”

“The information I got was I wasn’t included in the affidavits when they were completed on Nov. 26. To my surprise, my name was included in the same documents on Nov. 27, the [original] date of filing (in the Office of the Ombudsman),” he said.

But he vowed to “find out what really happened when the right time comes.”

On Monday, he urged customs personnel to “be the generation which will fulfill the desire of the people for a customs administration that they can trust and be proud of.”

“To my family, friends and staff at the bureau, my most heartfelt appreciation to you for sticking it out with me come what may. I love you all,” he said.

To the President, he said: “Thank you very much for this opportunity to serve you and the Filipino people. It has been a worthwhile endeavor, a learning experience and a memorable time.”

Asked about his advice to the next customs commissioner, Biazon warned: “Watch your back.”

Finance Secretary Cesar Purisima, the erstwhile immediate boss of Biazon, acknowledged that the task of reforming the Bureau of Customs was a tough one.

“We thank Commissioner Ruffy Biazon for his service to the Bureau of Customs over the past two years. We recognize his contribution and the difficulty he had faced,” Purisima said in a statement.

“We wish him the best,” he said.—With a report from Michelle V. Remo