Escudero: Calamity fund not for Lacson to spend 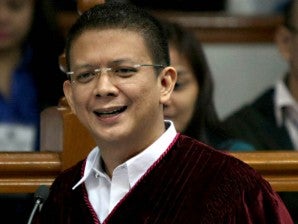 MANILA, Philippines—The billions of pesos in calamity and quick response funds—at least the ones allocated by Congress—for the Eastern Visayas are not for the so-called rehabilitation and reconstuction czar to spend but will go to the line departments, according to Sen. Francis Escudero.

“Senator [Panfilo] Lacson or the office that will be created [headed by him] is not an implementing agency. His is coordinative, so it’s the agencies that will use these funds, bid [the projects] out or implement [them] themselves,” said Escudero, the chair of the Senate finance committee.

That is, unless the executive order still to be threshed out detailing Lacson’s functions would define his office as an implementing agency, the senator said.

“But I don’t see that happening,” said Escudero.

Lacson, appointed by President Aquino to take charge of the rehabilitation and reconstruction of the regions devastated by Supertyphoon “Yolanda,” has expressed the wish that he be given “absolute authority” akin to the one that US General Douglas McArthur got in the aftermath of World War II.

“I don’t know the mandate of Senator Lacson and I don’t know the role that he will play here but the allocations that we are passing are through the implementing agencies.  These are the line departments,” Escudero said.

“So I don’t know the contents of the executive order as regards the office that will be created but it is clear that implementation will be through the agencies,” he added.

The Senate passed on third and final reading the joint resolution extending until the end of 2014 the validity of some P12 billion worth of 2013 appropriations for President Aquino’s calamity fund and some departments’ quick-response funds.

The extended appropriations would be augmented by the unspent and unobligated funds, or savings, of the executive branch, Escudero said.

Aside from this, Congress is also expected to pass a P100 billion rehabilitation and reconstruction fund to be included in the P2.26-trillion proposed budget for 2014.

It is also expected to pass before the year ends a P14.6-billion supplemental budget for 2013, also for calamity-related expenses. The supplemental budget will be funded by the unreleased portion of the congressional pork barrel that the Supreme Court has declared unconstitutional.

The Senate and House panels have yet to meet to reconcile their respective versions of the proposed 2014 budget and of the joint resolution on the P12-billion extended appropriations, hence there is no itemized distribution of the P12 billion.

“The distribution of the P12 billion for the calamity fund and the quick response fund will be up to the executive branch,” Escudero said.

To dispel suspicions that the fund will be a form of pork barrel under the executive’s control, Escudero said the joint resolution provides that the executive can’t avail of the funds “unless they submit a special budget to the DBM which they have to post in their website and give it to us.”

Meanwhile, Lacson said he was looking to tap the private sector in rebuilding more climate-resilient communities in the Eastern Visayas to avoid delays due to “bureaucratic red tape.”

“The role of the government, my role, is as an enabler, to monitor and oversee, to look at funding gaps that could be filled through other donations,” he told reporters at a Chinese Embassy reception Tuesday night.

Lacson said involving the private sector would allow a more speedy implementation of the rehabilitation project, as the disbursement of public funds would suffer delays.

“If we use government funds, we will have to deal with bureaucratic red tape. So how fast can I respond to the destruction?” he said.

Lacson said has received an “overwhelming” response from foreign donors and the private sector after his appointment was announced.

The Philippine government has already received some P531 million of the roughly P22 billion in foreign aid pledges as of Wednesday, according to Malacanang’s Foreign Aid Transparency Hub (FAiTH).

A senior UN official, meanwhile, warned that the rehabilitation of the most devastated communities in Tacloban City and Guiuan, Eastern Samar, will not take place overnight.

Before reconstruction efforts even begin, the government needs to thresh out several issues, particularly where to rebuild and how, said Yuri Afanisiev, senior recovery adviser of the UN Development Program (UNDP).—With a report from Tarra Quismundo