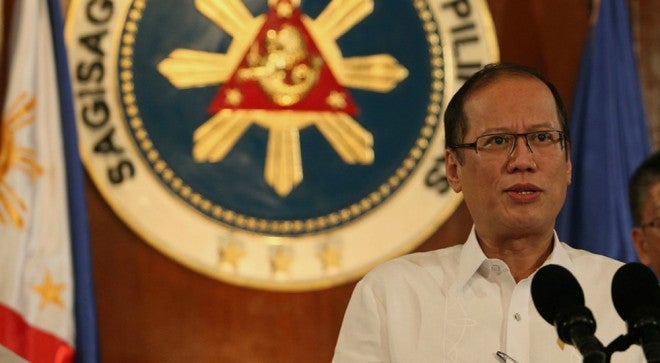 TAGBILARAN CITY, Philippines—President Aquino said Thursday the national government has allocated around P5 billion for the rehabilitation of Bohol province, which was hit by the 7.2-magnitude earthquake on Oct. 15.

Speaking at a press briefing following a closed-door meeting with the Bohol Provincial Disaster Risk Reduction and Management Council in Tagbilaran City, Aquino said he had been assured by Budget Secretary Florencio Abad that “the [funding] needed for Bohol has already been set aside.”

This is the third time that the President visited Bohol after the earthquake.

The National Disaster Risk Reduction and Management Council (NDRRMC), on its website, estimated the damage to roads, bridges, flood control, school buildings, hospitals and other public structures in Bohol at more than P1.383 billion, as of Oct. 30.

During his visit, the President inaugurated two steel bridges that temporarily replaced the collapsed Abatan and Tagbuane bridges in Maribojoc and Alburquerque towns, respectively.

He said permanent bridges would be built by next year, after tests are conducted, including boring tests, to ensure the best site for the new bridges.

The President said there will be a better location and higher elevation for the bridges.

“(The) end point is we want to give you these bridges and other infrastructure built back in a better condition,” he said.

Aquino also said a new hospital has to be built for Loon town.

Health Secretary Enrique Ona has reported that 169 health facilities in Bohol were affected by the quake and estimated the damage at P164 million.

Of the 169 health facilities, 21 were destroyed, including the Congressman Natalio Castillo Memorial Hospital in Loon.

Ona said the hospital in Loon cannot be used anymore and proposed that a new hospital be built to replace it. The Department of Health is partnering with the Loon local government for the construction of the new hospital.

He said the DOH has proposed a P289-million budget for the repair of destroyed and damaged health facilities.

Ona also disclosed that the latest death toll in the 7.2-magnitude earthquake was 208 while 877 persons were injured.

On Bohol’s power supply problem, the President said the Luzon grid will be providing a 100-megawatt augmentation for Bohol so the problem of outages in the province will be eliminated by next month.

The National Housing Authority (NHA) and the Department of Social Welfare and Development (DSWD) will offer shelter assistance for those whose houses were damaged or destroyed by the quake, Aquino said.

The earthquake displaced 75,140 families, or 370,836 persons, in Bohol, who are now living in 376 evacuation centers, the NDRRMC reported on its website.

The President also said the government will still pursue the proposed construction of the Panglao Airport as a feasibility study showed that the site for the airport was not affected by the 7.2-magnitude earthquake.

He noted that Panglao Island is seen as having potential “equivalent to Boracay.”