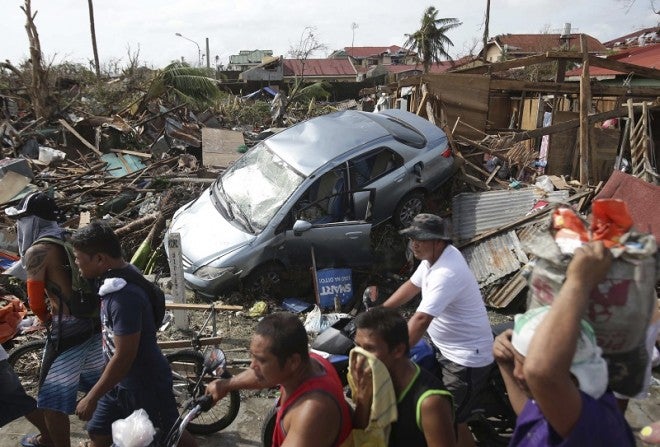 Survivors pass by damages caused by Typhoon Haiyan in Tacloban city, Leyte province central Philippines on Monday, Nov. 11, 2013. The city remains littered with debris from damaged homes as many complain of shortage of food, water and no electricity since the Typhoon Haiyan slammed into their province. Haiyan, one of the most powerful typhoons ever recorded, according to U.S. Navy’s Joint Warning Center, slammed into central Philippine provinces Friday leaving a wide swath of destruction and scores of people dead. (AP Photo/Aaron Favila)

Malacañang on Thursday asked the public to go easy on interchangeably using “storm surge” and “tsunami,” apparently to refer to the sudden and violent rise of water levels as what destroyed coastal areas in Leyte, Samar and neighboring areas recently. 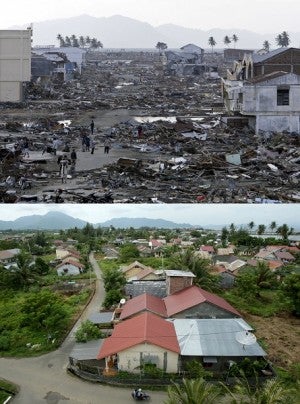 This combination of photos shows areas affected by the earthquake-triggered tsunami which hit Banda Aceh, the capital of Aceh province, Indonesia, on Dec 25, 2004. The top photo shows a devastated area on Dec 31, 2004, six days after the tsunami. The bottom photo shows an area with rebuilt housing on Nov. 19, 2013. AP PHOTO

Quoting Secretary Mario Montejo of the Department of Science and Technology, Communications Secretary Herminio Coloma said a storm surge “requires organized evacuation that can be undertaken within a 24- to 48-hour preparation period while a tsunami alert requires outright, spontaneous evacuation where the lead time can be as short as 30 minutes.”

“There is an important difference,” Coloma said in a press briefing. “So that in communication, we cannot just casually say that storm surge is like tsunami. I hope the clarification is sufficient.”

In the aftermath of Supertyphoon “Yolanda,” there came suggestions to describe a storm surge as a tsunami if only to alert them more effectively, especially given images of the powerful

The National Oceanic and Atmospheric Administration describes a tsunami as “a series of ocean waves generated by sudden displacements in the sea floor, landslides or volcanic activity.”

A storm surge is “an abnormal rise of water generated by a storm, over and above the predicted astronomical tides,” according to the National Hurricane Center.

“Storm surge is a very complex phenomenon because it is sensitive to the slightest changes in storm intensity, forward speed, size (radius of maximum winds-RMW), angle of approach to the coast, central pressure (minimal contribution in comparison to the wind), and the shape and characteristics of coastal features such as bays and estuaries,” the center added.